It's been a while since we've checked in with the youngest members of the Union organization and the coaches and trainers who work with them. In this week's edition, we check in with a live look-in at the "Delco Derby", and recall Union trips to Virginia Beach, Virginia and Doha, Qatar.

The winter (allegedly) is coming to a close, and that means it is time for the Development Academy kids around the league to return to the field.  Being that my chances of seeing the Union Academy will reduce when the MLS season starts, I decided to take a trip last Saturday to watch the Union Academy kids at the Proving Grounds, home of Continental FC Delco.

The Proving Grounds is a sports complex nestled in a small industrial area in Conshohocken.  Driving down Conshocken Road on a cold Saturday morning, one would think they'd entered one of those half-abandoned towns stuck in the middle of Pennsyltucky.  Just long stretches of lonely road.  It's not until you see the practice golf facility adjacent to the Proving Grounds where you realize you're still in Montgomery County.

The youth soccer gods blessed me by putting two of the Union sides on each turf-laden field and not have to suffer through three matches back-to-back-to-back in mid-30's weather.  I watched the U-14s for about 10-15 minutes before switching over to the oldest little DOOPers. 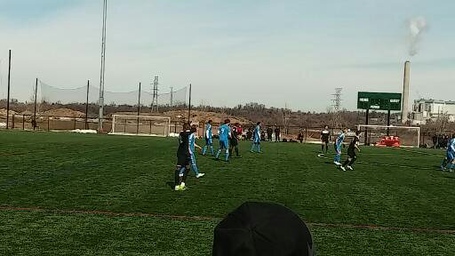 My first impression watching the Under 18's is that the fitness regime over at the YSC Sports Complex is paying dividends.  The Union kids were winning almost every 50/50 ball and intercepting plenty of passes in the middle of the field.  Some of the players, like forwards Neicko Williams and Spencer Reinford, look like they could fit in size-wise with the senior squad.  The other advantage the Union hold over a club like FC Delco thanks to YSC Sports (and the brand new high school attached to it) is the on-field chemistry.  While it wasn't as pronounced as the younger Union squads, the U17/18 attackers were timing their runs well while senior midfielders were feeding them excellent passes along the sidelines.

The Union dominated possession for much of the match.  FC Delco could barely manage a shot on goal until a bad first touch by Philadelphia University-bound goalkeeper Eric Gutierrez (who was sensational besides this misstep) lead to FC Delco player Tolunimi Ibikunle pounced on the ball just outside the 18 and scoring with a Union defender draped on his back.  To Delco's credit, they didn't bunker inside their own half and managed to create a few more chances.  However, the Union were still owning the midfield battle and getting the ball into Delco's 18 repeatedly.  It wasn't until the final seconds of the match when defender Will Campbell managed to lose his marker on a corner and head the ball into the back of the net, salvaging a point for the road team.

The Under 16s took center stage as the lone match of the second half of the Delco Derby.  This was the match I was most excited to drive 15-20 miles to go see.  The middle group of Doopers feature some nationally ranked talents all over the field, from left back Chris Gomez to forward Isaiah Young, who nearly scored a goal after a dazzling display of dribbling in which he beat four Delco players.  If he and his parents have any sense they'll feature that moment on his highlight recruiting YouTube reel (and if they didn't capture it on video, the Union sure did.).

From the opening whistle, the difference in talent and athleticism was even more stark than the previous match with the Under 18s.  One thing I love about this Academy setup is that each of the Academy units utilize the same 4-3-3, possession-based soccer that we saw the senior team demonstrate in their opening match against the Portland Timbers.  If this club is serious about building a strong academy and using it to help them compete against big spending clubs like NYRB and Toronto FC, implementing the same type of soccer throughout all levels of the organizational hierarchy can be crucial.

After continuously peppering Delco's goal with some impressive display of passing in the final third, attacker Kevin Carvalho opened the scoring with a beautifully floating shot from approximately 15 yards out that flew over the Delco goalkeeper's head into the top left corner of the net.  The Union doubled their lead after a Isaiah Young tap-in after a nice low cross from fellow attacker Abu Winter.  FC Delco responded 10 minutes later with a consolation goal after a nifty 1-2 pass in the box, but after that the Union tightened up and suffocated the Delco attack, leading to a few timely counterattacks.  I wish the team could've finished some of those odd-man rushes, but that's not just a Union problem.  Not finishing odd-man attacks often enough is a systemic problem that I see throughout all levels of American soccer.

Last weekend the Under 16s took a trip to Virginia Beach to face off with the Virginia Rush, who handed the U15/16s their first loss back in October at the YSC Sports Complex.  This time the Union struck first with a goal from new Academy member Conor Bradley.  However the Rush equalized later in the match and the Union had to settle for a draw.

Since the Under 18s and Under 14s were playing on adjacent fields simultaneously, I decided to watch the youngest Doopers for about 10-15 minutes.  Union players relentlessly pressuring the Delco midfielders made this very one-sided, but naturally it wasn't until I turned my attention to the Under 18s that the kiddies scored seven unanswered goals.  Academy newcomer Tonny Temple had four goals of his own in the 7-0 rout.  The Under 14s dominated FC Delco in two meeting this season 13-0.

Last Saturday the Union academy players born in the years between 1999-2001 traveled to Qatar to compete in a friendly international tournament.  The event was hosted by Aspire Academy, an elite sports institute headquartered in the capital city Doha.  The Union were also scheduled to play the Atalanta FC academy.  The Union were divided into three teams based on the year they were born in.  Aspire '99 and '00 players defeated their DOOP counterparts 2-1 and 4-0 respectively, while the '01 teams played to a 2-2 draw.

All three academy units return to the YSC Sports Complex this Saturday morning to play Bethesda-Olney.