Portland v Philadelphia: Inside The Numbers

A look at what the numbers say about the Union's dramatic draw against Portland. Who is the stat hero and stat goat?

Share All sharing options for: Portland v Philadelphia: Inside The Numbers

After each game we'll look inside the numbers to break down the Union's fixture. We'll find a stat hero and a stat goat and we'll break down the big picture. You might have seen the game differently but that's what makes looking at the numbers so interesting. Let's begin.

Soccer is a game of many actions that boil down to a few incredibly vital actions. The results of those few actions drive the outcome of the match. To help visualize the dynamic we start with a game funnel.

Quick orientation of the graphic. The blue bars represent actuals from the game. The lines intersect at the expected outcomes given the actuals higher up in the funnel. And the key stats to the right are just stats that augment the blue bars in slightly different ways. 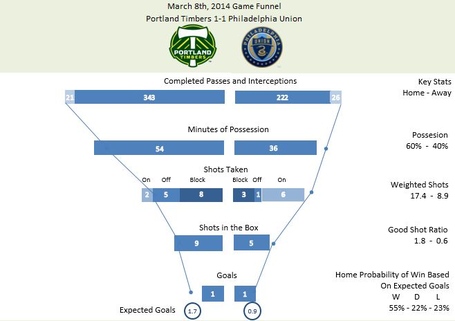 The definitions of these metrics are at the bottom of this post for the curious.

Portland completed 54% more passes than the Union and as such dominated possession throughout the game. Even before Jack's goal the Union had just 42% of the ball possession. After Jack's goal the Union made a tactical change to sit back and defend, controlling the ball just 33% of the time. The extra possession earned the Timbers 15 shots to the Union's 10 and nearly double the shots inside the 18 yard box. But the Union were steadfast inside the box and only 2 of the Timber's shots were on frame (which is where we will find our stat of the match). Union fans are upset about the sophomoric collapse on the final corner but given the funnel, the Union were fortunate to escape with a draw. Given how the funnel shaped up, the home team normally wins 55% of the time.

The Union blocked 8 of the Timber's 15 shots, an incredible ratio. The rest of MLS blocked just 22% of all shots on Saturday.

If blocked shots were the stat of the match then Amobi Okugo was the stat hero of the match. He blocked 6 of the Timber's 15 shots. He also had 10 clearances and won 2 offsides. His WhoScored rating for the game was a terrific 7.73.

Stat Goat of the Match

Sebastian Le Toux did not make enough of an impact in his 70 minutes of play on Saturday. He touched the ball just 26 times, the lowest for any starter. Offensively he did not register any key passes (passes that led to a shot) or take any shots himself. He also didn't register any defensive statistics such as tackles, clearances, or blocks. He was fouled once but fouled 3 times himself. While I love Le Toux he just did not make enough of an impact on the game. I think part of the reason for this was Portland's focus on Fabinho's side of the field. They constantly attacked down their right flank which led to the counter pursuit coming back on Fabinho and Maidana's side. Maidana was tied for 2nd on the team in touches with 55 and Fabinho 4th with 54.

What do you think of the stat hero and goat for the game on Saturday?

Interceptions are passes by the opposition that are intercepted by the defense.

Expected minutes of possession are the minutes the average team possesses the ball based on the actual number of completed passes and interceptions.

Shots taken are shots taken whether or not they reach the target.

Shots in the Box are shots taken inside the 18 yard box. They have a roughly 4x higher likelihood of going in the goal than shots taken outside the box.

Expected shots in the box are the average shots taken inside the box given the actual number of shots.

Goals are the lifeblood of soccer.

Expected Goals are the expected goals to be scored given the number of actual shots taken and where they are taken from in relation to the goal. You can read more about expected goals on American Soccer Analysis here and Brotherly Game here.

Home probability of outcome is the expected result for the home team based on the difference in expected goals.

You can find out more information about the game funnel expectation models here.