Camden Youth Soccer Club recently held it's 3rd Annual Darts tournament to raise money for the cost of running the club. Lots of people came out to help out, and this is the story of that night.

A little while ago, I wrote a story about Camden Youth Soccer Club and tried to entice you to help out by coming to our darts tournament. I would now like to thank everyone who came out, as well as give a little review of the proceedings.

Getting to the punchline right away I'll go through the money raised and how we did it. This year, we decided to go back into Camden and start what hopefully is a long and fruitful collaboration with the Victor Pub. This meant that we had to put a bit more effort and cost into getting set up. At the same time however - it allowed us to put on a "beef and beer" which was very successful. Hopefully everyone enjoyed the delicious food and drink that the Victor put on for us. $13 of your Beef and beer money went to the Victor, and the rest came to CYSC - this gave us a beef and beer profit of $294 (with $546.00 going to the Victor for costs). Thanks to everyone who took part in the beef and beer.

In terms of the darts tournament - we had our biggest ever amount of entrants with 22 paid players. The big difference this time is that we didn't have to try and persuade committee members to play who didn't want to. At $10 per person - we raised $220 through the darts tourney. Thanks to all those who played, and keep spreading the word for future events. That brought the total money raised at the event to $514 for Camden Youth Soccer.

Lastly there was the raffles - with some really cool prizes. Everyone's pockets were emptied by the looks of it. Raffle tickets allowed us to take in $268. With those numbers, either via the Paypal link or other donations on the night, the total money taken in for the night was an incredible $944. When you consider the $546.00 that was paid to the Victor - we took in $1490, which is about 3x more than we have ever raised before. We'd like to thank you all for helping to allow us to bring the beautiful game to the kids of Camden. There was about $240 of trophy/equipment/supplies that we had to pay for, but we still raised more money than we had ever raised before.

On to the night - lots of great darts were played. A lack of having the names for everyone means that I can't give the usual results that I've written in previous reviews. However, for the 3rd year running a Barrish ended up in 4th position. This time however, it wasn't Chelsea but her husband Brian who was 4th. For the first time - we would have a new name on the trophy - as 2 time champ Jeff Schroth lost in the semi finals, but did manage to get 3rd place. 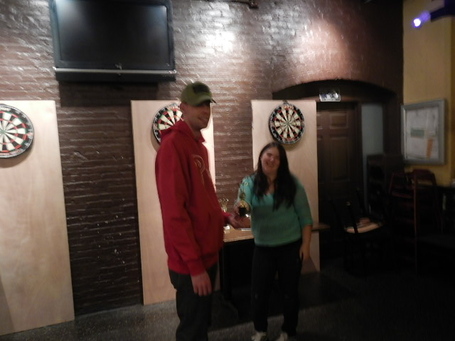 While he waltzed through the group stage, and easily won in the quarter finals and semi finals - the final was a different story for Michael Barycki, who ended up getting 2nd spot for the 2nd year in a row. He did manage to get a hug from trophygiver Rachel however. I would say that is ample reward. 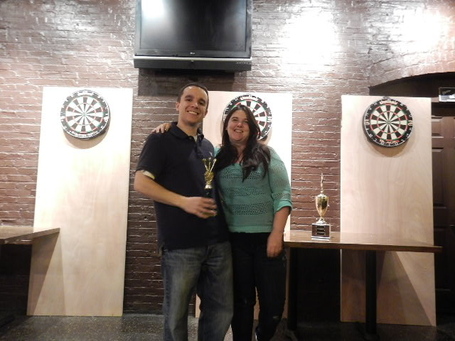 For the first time ever, our word got to local dart leagues. Unluckily for those that had to play against him, the quality stood out and our winner for 2014 was Gary Yourman, who plays in the Trenton Dart League. Congratulations Gary, and maybe we will be able to find some more challenge for you next year. 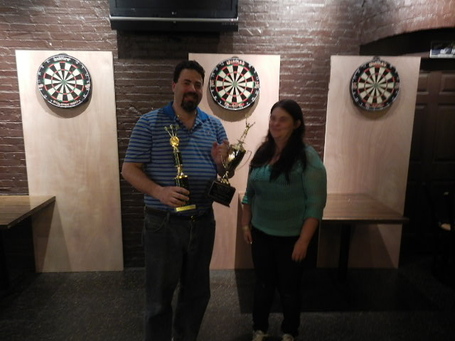 In terms of raffles - we have a few people we need to thank for the donations. Firstly, somehow, 9 dart-out found out about us. If you have never seen their website full of dart related goodies- you should have a look here http://shop.ninedartout.us/main.sc . They donated a gift-certificate that was won by Jeff Schroth, but then donated to the Todd's. I don't know if it was generosity, or the fact that Kieran and Harmony were celebrating their first wedding anniversary by attending our event - but the happy couple were pictured with the certificate below. 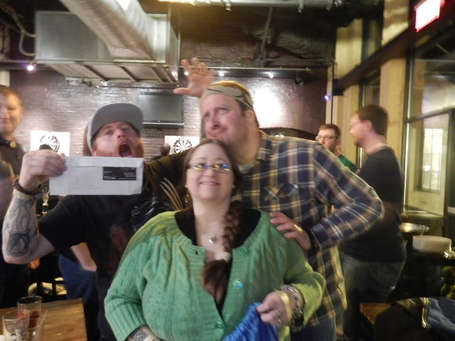 Kieran was the originator of the "anyone but Jeff" campaign, and while there's no link between Kieran and tournament winner Gary, the fact both are from Trenton is a little suspicious. It does make you wonder why Jeff handed over that certificate.... Also in that photo was Mark Concannon - one of the owners of the fantastically cool Bark Tees. As well as playing in the tournament, Mark donated a cool prize pack for Barktees, which Kieran and Harmony also won.

While Kieran and Harmony did win some raffle prizes - the fact they donated some was very cool. One of those was a dart case that Michael Barycki had won. Other raffle winners were CYSC coaches Jon and Amanda (tickets to one of the Philadelphia theatres), Jeff Schroth (both a Philly 76ers signed photo and a certified piece of the Spectrum floor from the last 76ers game played there). Gary Yourman won tickets to the Augusta Riversharks - the local baseball team.

The big prize of the day however was also donated by Kieran and Harmony. They donated a bottle of El Jimador Tequila (Philadelphia Union brand) that was signed by Sheanon Williams. With more tickets than any other prize, the lucky winners was Brotherly Game's own Heather and Matt Reppert. Knowing them, I would guess Heather wants the tequila and Matt wants the signed bottle. Congrats to both. 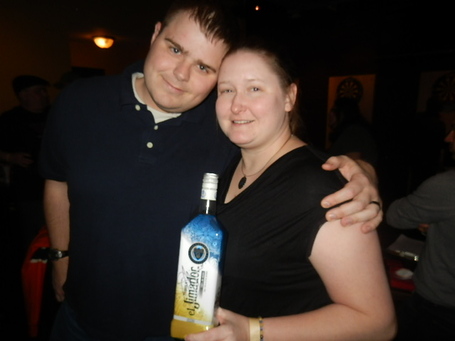 Overall, the night was a roaring success. We are already thinking of next years tournament - but before then you should keep an eye out for the 3v3 "Building Bridges" soccer tournament that should be in August. At the same time, if you want to still donate to CYSC you can do so via our paypal account, which you can get to by visiting our website www.cysc.us . Lastly for now, money is great - but the best thing you can do to help the kids of Camden (and our friends at Kensington) is to come out and volunteer your time. If you want to do that, come and see us at the Camden High playing fields. Our spring season is starting soon - hope to see you there. 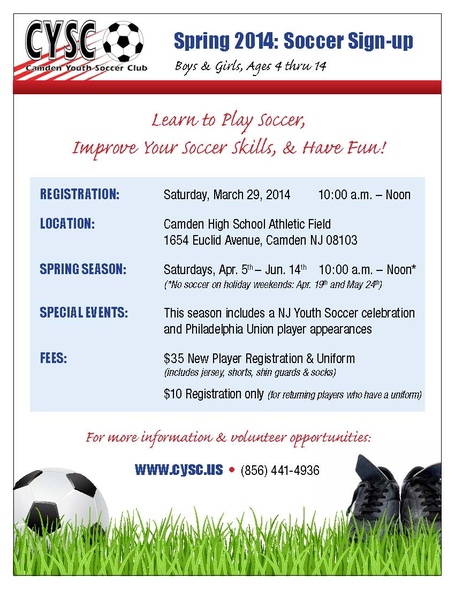