A Look to the Future - Philadelphia Union Formations of 2014

Barry Evans takes a look at the possible formations the Union could utilize in 2014.

Share All sharing options for: A Look to the Future - Philadelphia Union Formations of 2014

There has always been a stance of "I want to play a 4-3-3 formation" from John Hackworth ever since he took over for Piotr Nowak. In previous years, the excuse has been that he never had his players for this formation, but now that has all changed. He has made signings - this is his team. Will he go for the 4-3-3 or will there be other formations used? Here I'll discuss some of those options, explain what the formations mean to me, and who the Union could play in the positions.

Let's start off with what is apparently Hackworth's favorite formation - the 4-3-3. This worked well in Portland this year, and if we can get the same performance it should be a fun year. A 4-3-3 is usually quite a narrow formation, allowing for full backs to get forward - playing into Sheanon Williams' strengths. The midfield 3 can be set up as a 2-1 or 1-2 depending how many defensive midfielders you want to use. While it says 3 forwards - a lot of the time those include 2 players that like to get wide. This may well be the formation we see most of the time this year - and we have the players to do this. 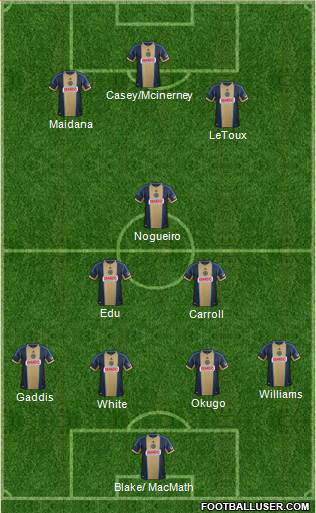 If the Union go 4-3-3, this is how I see them doing it (barring any trades of players elsewhere). The defense will be young and relatively inexperienced, so I think that Maurice Edu and Brian Carroll will both play as defensive midfielders, with Edu getting forward a little more. Williams and Ray Gaddis should be free to bomb forward. Vincent Nogueira will be the more attacking midfielder, hoping to link up with the front 3. Cristian Maidana's the guy who the club has signed to open up the 4-3-3, being almost an old-fashioned left winger. Sebastien Le Toux would be most likely to play on the other side (although we may see Danny Cruz get playing time there). Up top - it will be a mix of Jack McInerney or Conor Casey from game to game.

This should be a more attacking lineup than has been in the last year - as long as the full backs get forward too. The big drawback for me is that Casey (a Union MVP candidate last year) and McInerney will both lose playing time in this formation. At least it will be Hack's guys out there playing Hack's formation - so if it all goes wrong this year then he has only himself to blame.

A slight difference to this, and probably what Hack's 4-3-3 will really be is more of a 4-2-3-1 formation shown below. 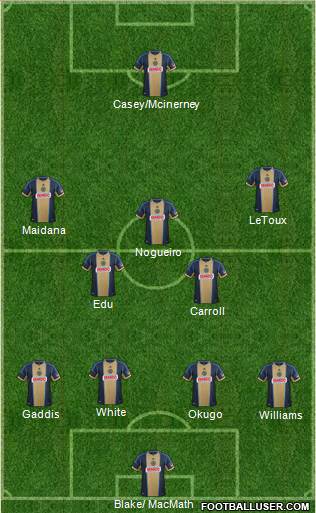 This is basically the same formation - only Maidana and Le Toux will be pulled back beside Nogueiro, with Casey/McInerney being up top alone. My worry about this is that it is set up as far more a defensive team, settling into the same pitfalls as they did last year, albeit with better quality players. Can the wingers get up to support the striker, and not leave them isolated up top? Carroll and Edu should still provide plenty of cover for the defense, which should help them out. Again - a big drawback is going to be low playing time for Casey and McInerney - added in to can either of them really excel in such a formation.

If we ended up trading Carroll (as has been rumored elsewhere), then one formation that could really work would be a plain old 4-4-2 type (or even 4-1-3-2). With this one - Maidana and Le Toux will be the wingers, and will have more defensive work than the other formations. Edu would sit back as the DM and protect the defense, and Nogueira will again be the guy asked to provide for the forwards. This time - Jack and Casey will both get playing time. 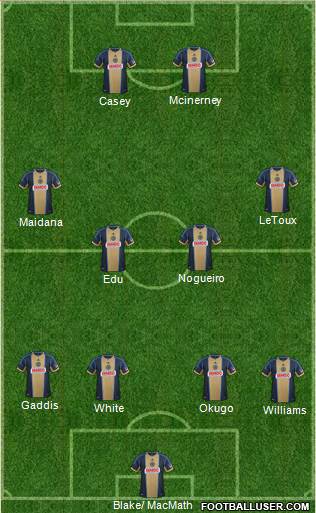 The Union in my opinion were far better last year when Casey and McInerney were up top together, playing well off of each other. This will allow them to continue that partnership - and the quality of service to them should be far higher - with all 3 DPs being far better quality than those from last year whom they replaced. Of course - that formation will only work if Carroll is traded, benched, or rotated with Edu, however if last season was any indication, if Carroll is on the team he plays. Another way of doing a 4-4-2 would be to have Le Toux on the bench (or playing up front instead of McInerney). 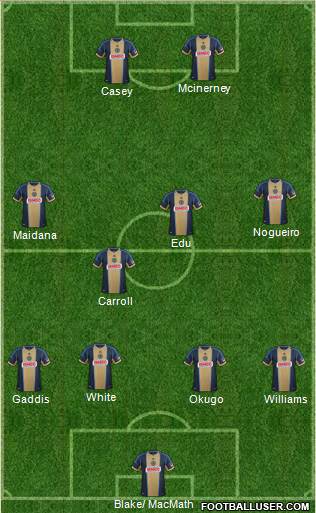 Nogueira would be out on the right with Maidana on the left, and Carroll and Edu holding the middle. Edu would need to go forward more, but he has some experience as a box to box midfielder. This formation again has McInerney and Casey up top, but will likely not happen as then Le Toux would be benched. Another thing to note in this formation is that Nogueira and Maidana may pull inside - almost creating a diamond shaped midfield with Noguiera and Edu as box to box type midfielders and Maidana as a central attacking midfielder.

Overall - we will probably see all of these formations multiple times through the season. There's still a month for Hackworth to wheel and deal to give us better options (especially at left back or central defense) and tinker with lineups and formations. However as of right now, that's how Hackworth can get his 4-3-3 with the pieces he has - and it may just work. I personally think it will be more like the 4-5-1 formation listed - but i'm hoping Hackworth proves me wrong. I will say one thing - it sure does look a lot better than this formation with personel the Union had out for most of last season : 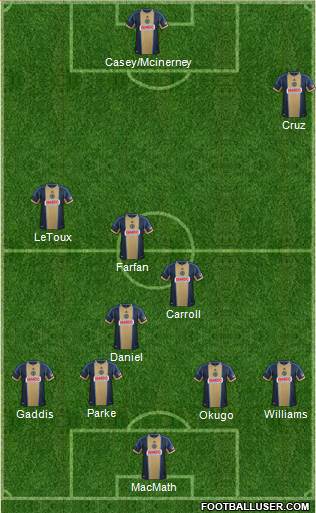 More: Journey to the Heart of the Union