We complete the off-season journey through the land of soccer statistics. The last stop is the importance of shot location and shooting percentage. And after all the doubt about their value, the forwards finally get their due.

The poll at the end of this post asks the following question: If you were the GM or owner of an MLS club would you pay $2.6M for 1 MLS win? In baseball, the sabermetrics community debates the salary value of a win. The latest thinking is that a win in baseball costs $7M in player salary. But how about for a win in MLS? There are 80% less games, thereby increasing the value of a single win. But MLS teams pay over 96% less than MLB teams pay for players. Give that some thought as we explore soccer statistics around shot location and shooting accuracy.

Before we look at shot location data for the Union last season, a huge shout out needs to go to the analysts at American Soccer Analysis. They provided this data gratis and they offer outstanding forward thinking analysis on soccer, focusing on the American game. Let's dig into the data that they painstakingly put together.

Below is half of a soccer field broken into 5 zones. 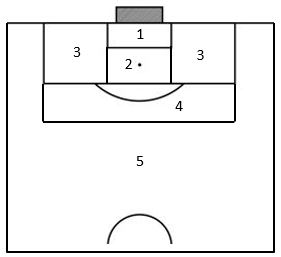 Here is the distribution of shots taken in those 5 zones. 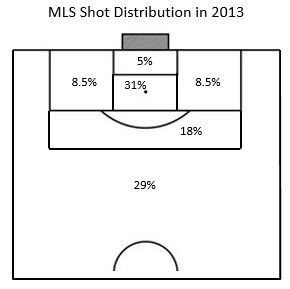 Just to be clear the zone 3 data is not broken out by left and right side, so I've made the shot distribution even in the chart. Nearly 1/3 of all shots are taken in front of the goal but outside the 6 yard box. And almost half of the shots are taken from outside the 18 yard box.

Now here is the shooting percentage (goals over shots attempted) from shots taken in the 5 zones. 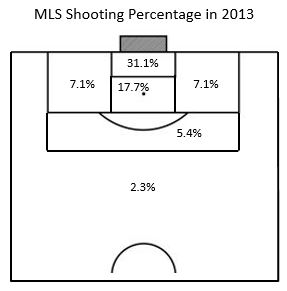 Remember the zones outside box where 47% of the shots in MLS are fired from? They have a 3.6% success rate. That's one in every 27 shots. Next time the fans groan when a player shoots from 25 yards away, they should feel justified.

While we're here, sitting with this data in our minds, let's talk about how justified they should feel. Let's pretend that a coach put out a mandate that no player on the club should shoot outside the box. Let's pretend the team obeyed this absolutely. It's safe to say they would squeeze off less shots as they would lose the ball trying to pass or dribble the ball inside the box. But at the same time the team would get off better quality shots. Let's be conservative and say that none of the new shots taken inside the 18 yard box are taken inside the 6 yard box. But the shots are distributed as they normally are between zone 2 and zone 3.

The average team took 435 shots last year. And 206 of them were outside the 18 yard box. They scored 7.4 goals on average from that area over the course of a season. If all of those shots were moved into shots from zone 2 or 3 they would have scored 28.8 goals. That means that teams could give up 153 of those 206 shots from outside the box to get 53 more shots inside the box and they would score the same number of goals. The question then is, if a team was going to shoot from outside the box, how many times would they turn it over before getting a shot inside the box? If the answer is less than 75% of the time, then the team should be passing instead of shooting. Food for thought.

Now let's take a look at the Union shot distribution. We'll subtract the league average from their percentage. 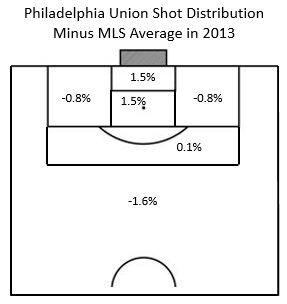 Of the Union's 459 shots last year they were able to shift 3% more of their shots into the most dangerous areas. They also were slightly better than average in avoiding those lower percentage shots. So how did their accuracy compare? 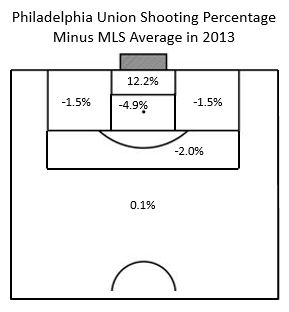 The Union shot astoundingly well inside the 6 yard box converting 12.2% more of the shots in that zone. Unfortunately that was only 6.5% of their shots. They suffered mightily when shooting just a few yards back, between the 6 and 18 yard lines. Their shooting percentage was also subpar outside of that range.

The net impact of the shooting percentage was catastrophic. Here is a chart of the Union goals minus the goals they should have expected to score by shooting just the league average. 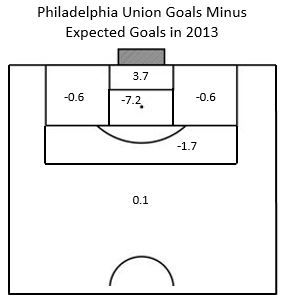 The Union scored 6.3 less goals as a result of poor shooting, despite getting better shots than the league average. The worst area was the poor shooting in zone 2. Before summarizing the observations, let's look at how the defense fared at the other end of the pitch.

First the distribution of shots. The Union opponents shot 434 or 25 fewer shots than the Union did. That calculates to a 1.06 shot ratio (Union shots over opponent shots), meaning the Union fired off 6% more shots than their opponent. 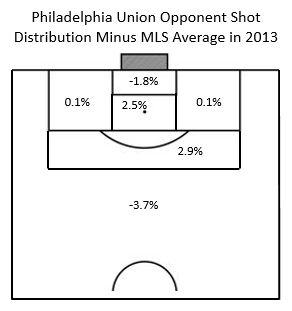 The Union did a decent job of keeping opponents outside of the 6 yard box, but they were susceptible in the middle of the 18 yard box and zone 4. Teams were also able to squeeze off more shots inside zone 5 on average.

Let's look at how their opponents shot from these zones. 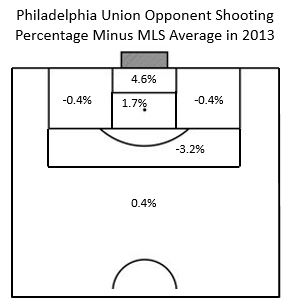 The opponents were more deadly close in and less deadly from further out. In the end, the Union opponents shot as expected. 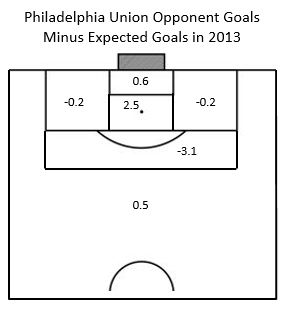 Union opponents only scored 0.2 more goals than expected based on shot distribution. While it appears the Union can firm things up in the middle (oh wait, they didn't do that this off-season?) the shot location and shooting accuracy of their opponents was as expected.

The Union's issue clearly was in their shooting accuracy. But when we look at Jack Mac and Conor Casey, we see that the forwards shot roughly 15% on the year, which is almost 50% above the league average. The shooting issues were from the midfield which took 44% of the team shots. They found net on a miserable 4.8% of them, less than half the league average. When fans look to blame the midfield for last season's woes they shouldn't look at the possession or the shots ratio. It appears the midfield held their own by helping create more shots than their opponent and the location of those shots were better than average. The issue really lied in their ability to shoot. It was downright awful. A goal made or given up is worth 0.65 points in the appropriate direction. So 6.3 more Union goals would have been worth 4 points and a playoff berth. Look no further than this. 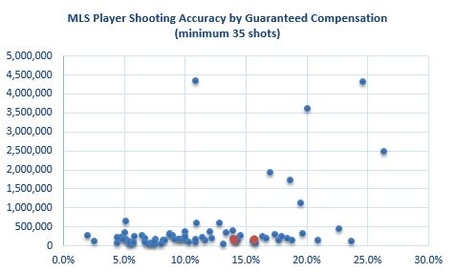 The two maroon dots are Casey and Jack (Casey on the right). Notice below $500K in compensation there is no reliable shooting accuracy gain the more you pay. Under $500K, only 21% of players shot better than 15%. However, there are 7 players paid above $1M on the chart and all of them shot above the average. Six of them shot at least 17%, 70% better than the average player. So what you clearly buy when getting a million dollar player is a player who shoots far more accurately than the rest of the league, and they do it predictably.

Let's assume you can replace an average 35+ shot player with a premier player like Robbie Keane or Thierry Henry. Not only would they shoot much more accurately but they would consume a higher percentage of the team shots (as they should). Examine the table below.

Based on just shooting alone, spending $2.6M will create 5.6 goals, which is worth 3.6 points. The high priced players have their value revealed. After discussing the math around luck, defense, possession and weak players, all of which largely ignored the purpose of forwards, there is strong support for the value of shooting the ball.

We've seen the power of shot location and shooting accuracy. Take a shot inside the box and your shooting percentage goes up more than 4 times shots taken outside the box. If the Union midfielders just shot at the league average, the Union would have been a playoff team.

Now I can ask the question again: If you were the GM or owner of an MLS team would you pay $2.6M for 1 MLS win?