Soccer, Darwin and an Offseason Analysis of TFC and the Union

What do soccer and Darwin have in common? It's all about finding the fastest rabbits. Or is it? What we learn might dampen the enthusiasm for Toronto FC and lift the spirits of Union fans.

Share All sharing options for: Soccer, Darwin and an Offseason Analysis of TFC and the Union

In 1859 Charles Darwin released the first version of his famous publication On the Origin of Species. From his thinking we were first presented the ideas of natural selection and evolution. You know, where the faster rabbit gets away from the enemy and the slower rabbit gets caught and eaten. Over time rabbits get faster. Just 4 years later and 150 miles thence, the rules of modern day soccer were written down at Freemason's Tavern. Hands free English soccer as we know it today was born. That's quite a productive time and place.

But other than the similar origin of their powerful ideas, what else do Darwin and soccer have in common? Let's pretend that a soccer club is an animal species. And now let's ask ourselves the question, is it better for a species to get rid of a slow rabbit or add a faster rabbit? In the animal kingdom this decision happens naturally but in soccer the front office controls the evolution of the soccer team. I call that unnatural selection.

So what is more effective? Putting it in purely soccer terms, should the front office focus on replacing the weakest player or focus on adding a star player. Do star players win games or do weak players lose games?

We can look at this analytically. A similar exercise was published by Chris Anderson and David Sally in their recent book The Numbers Game: Why Everything You Know About Soccer is Wrong. They looked at European league results and used the Castrol Index to define the strongest and weakest player on each team. They then plotted the players' scores against the teams goal differential and point totals. I did this for MLS in 2013. But I took it another step. I used the WhoScored Ratings (which I prefer) to double check the answer. The results are pretty fascinating and consistent.

Here's the chart when using the Castrol Index. 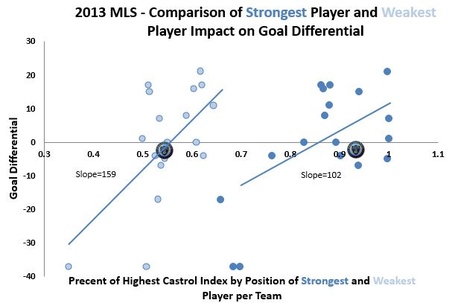 The same results are evident when using the WhoScored Rating to determine the best and worst player. 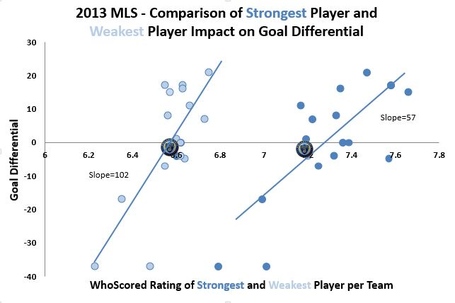 The evidence is compelling that soccer is a weak link sport. It is more important to improve a weak link than add a big time name, likely for big time dollars. This of course flies counter to what fans in general demand. Many fans are still jealous of the TFC offseason acquisitions of Gilberto, Michael Bradley, and Jermain Defoe, and they no doubt will dramatically improve the team. But what became of Toronto's weakest player? An early season look at their new depth chart reveals that newcomer Justin Morrow will be the weakest player according to WhoScored, with a rating of 6.55. That's a dramatic improvement from Reggie Lambe who earned the honors last year with a 6.35 rating. Nevertheless, teams that have a player scoring below 6.6 have significantly lower chance of scoring 50 points. Scoring 50 points was the target line last year for making the playoffs. See the chart below. Only 30% of the teams with a player scoring below 6.6 make the 50 point target. On the other hand, teams that don't have a player below 6.6 score 50 or more points 78% of the time. 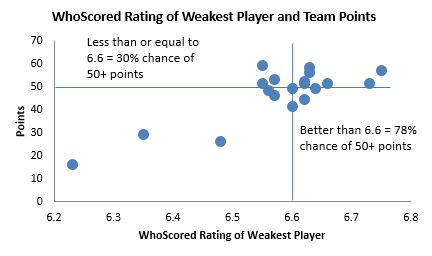 I'm not going to predict that Toronto FC doesn't make the playoffs. I think that they built up the middle and top of the team enough to do so, but this weak link factor is interesting and something to keep an eye on.

The Union fared well when looking at the weakest player in the offseason. Last's years player for the Union was Danny Cruz at 6.57. I project Cristian Maidana, should he replace Cruz, to be above the 6.6 threshold. In fact, all players other than Cruz plus the Union newcomers Maidana, Maurice Edu, Ethan White, and Vincent Noguiera all project to have a WhoScored Rating above 6.7 (but that's the subject of another post). Only 2 teams last year had a team with no player below 6.7 and they both made the playoffs (Colorado and Portland).

So we have a little reason to sneer at Toronto's offseason along with the Union CEO. The Union may not have picked up the fastest rabbits like Bradley, Defoe or Gilberto but they shored up the rabbit quality throughout the pitch and now project to evolve to the next phase of their existence, the playoffs.