The MLS CBA: A Perspective on the League and Owners

We have entered the final year of the Collective Bargaining Agreement between MLS and the MLS Players Union. We'll track the negotiation all year long (and hopefully not longer). First, we look at the league and owners and look for the truth behind the early posturing.

Share All sharing options for: The MLS CBA: A Perspective on the League and Owners

However you spent your New Yearâs Eve itâs unlikely you were thinking about matters related to MLS. But this coming New Yearâs Eve might be different for fans. The Collective Bargaining Agreement between the MLS Players Union and MLS will expire on December 31st, 2014 and there may be high drama in the world of American soccer. The Collective Bargaining Agreement, or CBA, is a contract whose renegotiations are stressful across all sports. The NBA, NFL and NHL all experienced work stoppages as a result of an expiring CBA in the last 3 years. The NHL actually nearly lost their entire 2012 season less than 10 years after skipping the 2004-05 season due to a protracted fight over a CBA. The reason for the occasional acrimony is because the CBA defines how the financial pie is going to be split between the players, owners and league for the next half decade or more. Needless to say, there is a lot of money on the line.

MLS and the MLS Players Union actually had a 49-day work stoppage 4 years ago at the beginning of the current CBA. On March 23, 2010 a 5-year agreement was finally reached which kept the full season in tact. Since then, MLS has enjoyed solid growth in the US, so there is plenty of incentive to avoid a work stoppage and to continue the momentum. But as more and more money pours into the league, the stakes are raised with every new CBA negotiation. Believe it or not fan perception plays a role in what will be a semi-public negotiation. The fansâ state of mind matters and can be used as leverage by a party to force the other party to agree.

Thatâs why it was no accident that Don Garber, commissioner of MLS, made a public statement about MLS finances at the SuperDraft in January.

Don Garber getting ready for CBA talks: "The league is losing between $75 and $100 million a year."

As Grant Wahl states, this is a clear set up for the pending negotiations and the message is that the owners and league don't have any money to give the players. But is Commissioner Garber sharing meaningful information or is this information misleading? Should fans believe that MLS finances are in tatters?

The League and Owners (uniquely and inextricably linked) can earn a return on their investment in two ways. They can grow the value of their team. Or they can extract profits from their team. This is identical to how any shareholder of a company makes money. Shareholders earn money when the stock price goes up. They also earn money when the company pays them a dividend, or a portion of the profits. Of course the most profitable of the two is growing the valuation or stock price of the team. While profits often influence stock price, it's not the only determining factor. We have a recent "in our face" example of that happening. Twitter's recent public offering gave the company a value of nearly $25 billion, yet Twitter had never reported a profit. So while profits are important, they aren't the only factor when determining economic value. Therefore it's a little curious that Don Garber's quote focuses on the profit producing side of the equation and ignores the stock price of the teams.

Whatever Don Garber is saying publicly, you can be sure that the tone is quite different when talking to the owners and potential owners. David Beckham and potential owner LeBron James are likely not interested in investing in Miamiâs franchise if the league is losing $75M+ dollars per year. Not without a terrific explanation. And a potential owner is definitely not likely to pony up the $70M franchise fee that Orlando did just to play if the prospects for profit were bleak. It's a sure thing the conversations in the board rooms are quite different.

Reality Check #1: Sports franchises are not driven by profit margins. They are driven by growing revenues that increase the value of the franchise stock price. If any sports owner pockets too much money the fans will question the will to win. Excess profits must be poured into the team to be competitive and grow the sport. This is the situation MLS finds themselves in currently. Look at the chart below comparing the EBITDA Margin of sports leagues from 2012, a sample of industries and the S&P 500. EBITDA is earnings before taxes, interest, depreciation and amortization. It's a standard metric that attempts to determine the core profitability of a business. 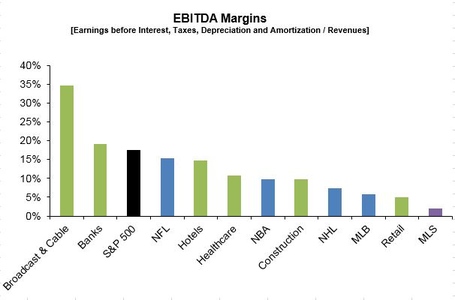 With the exception of the NFL, sports leagues are generally on the lower end from a profit margin perspective. But not even the NFL touches the average margin of the S&P 500. It's very possible MLS is very low because they are investing the most into growing the league and currently less interested in profit margin. The margins of the other leagues like NHL, NBA and MLB would be a good target for MLS once the growth rates slow down. However, that could be difficult to achieve given the strong competition from club leagues around the world. With margins low, the growth of the stock price of the team becomes critical to the owner success story.

Reality Check #2: Consider the fact that the Philadelphia Union paid a $30M franchise fee in 2008. Last yearÂ Orlando paid $70M and itâs reported thatÂ NYCFC paid $100M for their new franchises. Thatâs 19% year over year growth if you look at the $70M and 27% growth looking at the $100M. That's solid economic growth during any period of time, but that happened during one of the worst economic periods in history. There has to be a very compelling investment story to be able to charge these increasingly higher fees.

Reality Check #3: The reason MLS can charge higher franchise fees is in part revealed in the chart below. MLS data reflects only the growth of the 13 teams in the league during the 2007 season. 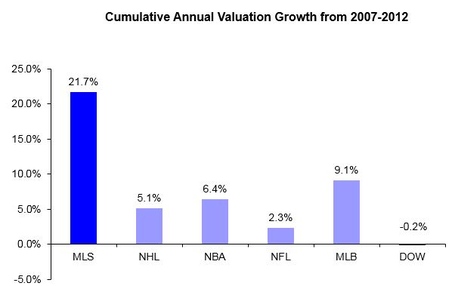 This data reflects pure value (or stock price) growth of the team and does not factor in the debt ratios (good for investors) or interim equity infusions (bad for investors) which would alter the results on an owner by owner basis. But this shows clearly that MLS owners have enjoyed terrific value growth compared to their fellow sports owners. Itâs no wonder investors are lining up to be one of the 24 franchises by 2020. If MLS is losing money, it's because they are investing heavily in growing the sport - and it appears to be working. But that's not what Don Garber wants you thinking about. He and the owners want full control over just how much incremental salary to give for the next 5+ years. If the profit story looks too good, they will lose that leverage and control.

The takeaway here is that MLSâ story to owners is a strong one. Existing owners have enjoyed extraordinary increases in their franchise values and as a result MLS is able to charge significantly higher franchise fees. The cry of thin or negative margins should fall on skeptical ears, as the league is in aggressive growth mode and are investing their profits into growing the league. But what are the owners hoping for in the next CBA? Certainly they will have to concede raises to existing players. And there are actually selfish reasons for this. If they are going to fill 5 more team rosters with quality talent by 2020, they will need to attract quality players to play in the league, and that will require higher salaries. They will be looking to balance the future profitability of the existing owners with the need to attract players with better salaries and attract good future owners. We will get more specific in future posts about just how much change to expect as details of the negotiation "leak out".

In the next post weâll look at the CBA negotiation from the playersâ perspective. How fairly are they paid? And what might they be looking to achieve with the next CBA?