Union vs. Fire Preview: Does Curtin Need to Make Changes?

Opponents appear to have found a way suffocate the Union's counter attack. Will Curtin change it up against the draw happy Fire?

Share All sharing options for: Union vs. Fire Preview: Does Curtin Need to Make Changes?

The Union welcome the Chicago Fire to PPL Park for the first time this season, but don't expect the welcome to be warm. The Union are in desperate need of three points. Anything less than a win and any remaining embers of hope for a playoff run will be snuffed out. The Union find themselves in these desperate times thanks to a recent run of poor form. They've just 1 goal from the run of play in the last three MLS games and have managed two draws and a loss.

After averaging over one and a half goals a game since Curtin took over, the Union have suddenly struggled to score. Teams are adjusting to Curtin's bunker and counter strategy and neutralizing its effect. Prior to the last 3 games, Curtin's Union were being out-shot on average 13.0 to 11.4. While that might not seem like a good sign, the deficiency was by design, as Curtin preferred quality attempts taken off a counter attack with more space than quantity of shots. And the defense was willing to stay more compact and absorb more shots in an effort to create the space for the offense.  This lead to losing the battle of shot attempts but an increase in goals scored and decrease in goals allowed compared to the Hackworth era. However, in the last three MLS matches the trend has been reversed. The Union have outshot their opponents in each of the three games, winning that battle 15.3 to 9.7 on average.

This trend indicates that opponents are protecting against the counter and conceding possession. Part of this is due to the fact that the Union have not had a lead in these last three games. But the bottom line is that the Union are taking fewer quality shots. No statistic highlights this struggle more than looking at the trend in the number of crosses the Union are attempting per game.

If teams had their way, they would break a defense down in the middle of the field, where it's easier to connect passers to shooters. Crosses are more of a Hail Mary in that a longer pass must connect with an oncoming offensive player at exactly the right time to score a goal. When thoase goals happen they are things of beauty, but the reality is they are not the most efficient way to score.

Here is a chart of the Union's crosses per game this season compared to their goals scored in those games. 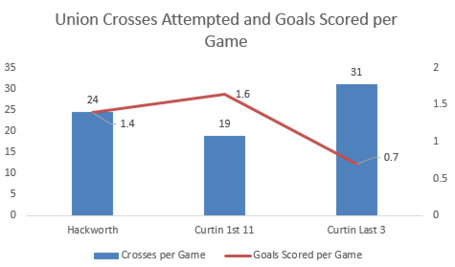 The Union's offensive efficiency is strongly correlated with the number of crossing passes they attempt per game. Teams that pack the middle and force the Union out wide are finding success.

This tactic of packing the middle by the opposition also reveals itself when looking at the ratio of blocked shots to shots taken. The higher percentage of blocked shots the more defenders are back and between the shooter and the goal. 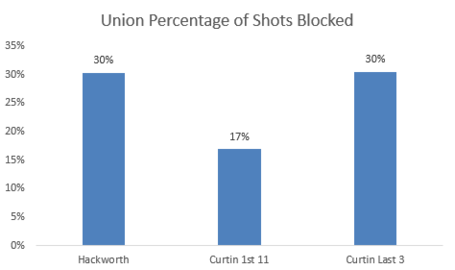 During the last three games in which the Union have struggled offensively, the percentage of shots that are blocked are back to where they were under Hackworth. When Curtin took over the counter attacking gave the shooters more space in which to shoot as evidenced in the first 11 games.

The challenge for Curtin and the Union will be to penetrate the Fire defense from the top of the 18 yard box and create chances more directly.

What do the Fire bring to the table?

The Fire have had a very inconsistent season, which has been unraveling of late. In their last 19 games, the Fire have won just three times. They managed to score more than one goal in just three of those games, but weren't able to win any of them. The Fire are kings of the draw boasting a league high 16 such knots, and 10 of their last 19. The Union are no strangers to drawing the Fire, having drawn both game this year at Toyota Park.

Offensively, they do have what it takes to cause fits for the Union defense. Quincy Amarikwa and MVP Mike Magee have combined for 15 goals this season, not a number they had hoped for, but a number that commands enough respect by Valdes' backline. With Mike Magee out for the rest of the season the Fire have a gap to fill at forward. In the last match Robert Earnshaw was the replacement but Chicago has also attempted a lone striker set up with 5 midfielders.

The Fire have the second lowest possession level in the league and certainly have the mindset to attempt the blueprint left by the Union's last 3 opponents. They had a stretch of 9 games earlier in the season where they allowed more than one goal just once, so their defense does have what it takes to shut down opposing offenses. Expect the Fire to limit Union counter attacks by playing it very safe defensively, and then look to get the ball to their very capable forward pair.

How will the game play out?

Based on Curtin's midweek press conference, don't expect many adjustments. Curtin said of the last few games, "There's been a couple of opportunities we've had in the attack; we're getting crosses, we're getting chances and for whatever reason it's just not going in right now. We will have to tinker and shake some things up and maybe give a different look, but at the same time, it's not something we're really harping on." Definitely doesn't sound like someone who feels the team's approach is no longer working.

The reality is so much depends upon the Frenchman's ankle. Le Toux has been the offensive spark during the Union's resurgence. Curtin described Le Toux's status as "day-to-day," but that seemed optimistic. If Le Toux can't go, Curtin offered up obvious options like a direct replacement with Cruz or using Fred centrally, with Maidana moving out wide.

Expect Curtin to make the safe choice and go with Cruz and leave Fred as a bench option. Also expect Curtin to recommit to the counter approach that has gotten him to this point. 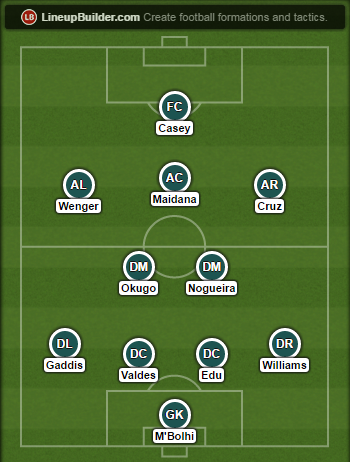 The Union's will will find a way against a Chicago team that is playing for next year. Union win 2-1 setting up an enormous matchup against the Columbus Crew.