It appears that the wait for Union related news is over. Silly Season has officially kicked off on Twitter with two current Union players and one former Union defender talking about the practice facilities. Oh yeah and apparently the Union made a bid for the returning Michael Bradley as well.

Around 2 PM EST, news started to break via twitter that Michael Bradley was going to sign for Toronto FC. Once this rumor gained steam and started to seem more and more legitimate, Philadelphia Union fans started to bemoan the club's lack of activity. That turned worse when it was revealed that the Union were rumored to have been in the running but were ultimately outbid for Bradley by Toronto. While this seems to directly contradict the reason for MLS' single-entity structure, it's not like the league is averse to changing its rules on the fly.

Then came a pretty innocuous tweet from Amobi Okugo where Okugo asked Bradley to "stay overseas we look up to you ...you're one of the few #ambitionispriceless ...but if you do come to philly haha" Ex-Union teammate Bakary Soumare tweeted "Have him train at Chester Park? Come on bro " Chester Park is just that - a park in Chester out near Widener University where the Union practice. It's a public park on the outskirts of Chester, near Crozer Chester Hospital. It's a public park, and when compared to professional or even college practice facilities, it pales in comparison. Later, Two-Pole Kevin (a friend of mine so named for his designing and displaying two-pole banners at matches) asked Soumare if that was the biggest downside of being in Philly, to which Soumare responded "in my opinion yes, the ONLY downside... Besides that, everything else is first class!" Here, Zac MacMath tweeted "Debateable" Spelling aside, it was a rather damning tweet against the club - at least it was until it was deleted. MacMath then tweeted " how would the guy prepare for the World Cup without a training facility". 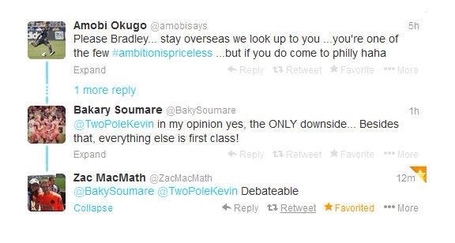 This all comes on the heels of a piece published by the club where CEO Nick Sakiewicz goes on record saying "It’s a top priority. We are finalizing plans and the financing to build two practice fields here for the first team... We do hope to break ground on those fields here very soon." Not soon enough to land Michael Bradley though. Then again according to Ives Galarcep, the Union weren't really in the running for Bradley.

Usually I'm loathe to write about this sort of thing, but when the club releases no information during the offseason aside from an interview to an official source that turned out to be wrong and another interview from an official source that seemed to be less of an interview and more of talking points from the club, there really isn't much else to write about. Mind you I don't blame the writers in these instances - they write what they're told by who they're interviewing (especially in Dave Zeitlin's case). In a league that is anything but transparent, Philadelphia stands out as particularly closed-off to everyone but a few. And when you have a club who was as close as the Union were to making the playoffs be as quiet as they have been this offseason, you hold on to the hope that something big is just around the corner.