How Important is Possession to Winning MLS Games?

A look at the statistical importance of ball possession in MLS and how the Union fared last year. And also a bonus analysis called The Curious Case of DC United.

Share All sharing options for: How Important is Possession to Winning MLS Games?

If soccer is about putting a ball in a net and stopping the opponent from doing the same, it would stand to reason that being in possession of the soccer ball would advance both objectives. Possess the ball and score. Possess the ball and your opponent can't score. Yet it is the magicians at the end of the pitch, the strikers, who possess the ball very little and are paid handsomely to finally place the ball in the back of the net. MLS is no different. The top 10 highest paid players are all forwards and they earn 27% of all league guaranteed compensation. Yep, 577 players got paid by MLS last year and less than 2% of them received 27% of the money. Only 2 of those 10 forwards registered over 750 passes last year (Keane, Henry). And its passes that lead to possession. Take a look below. It's a plot of completed passes and possession rate and the relationship is very clear. 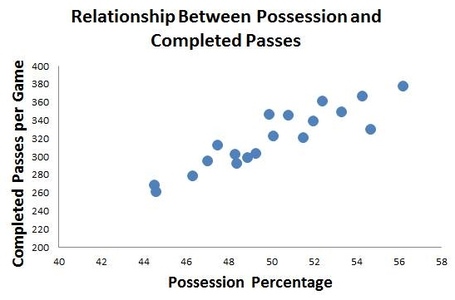 So just how important is possession to winning games? If forwards make all the money but don't contribute significantly to possessing the ball, perhaps possession isn't very important after all. Here is a chart of possession by MLS team last year and its relationship to league points. 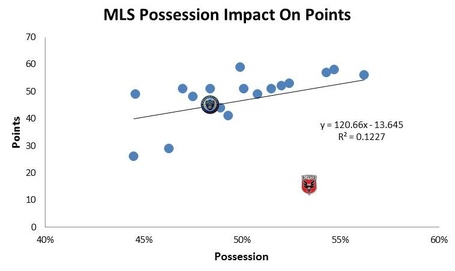 There appears to be a strong relationship between possessing the ball and league points, but something is very wrong. That something is DC United. They are an incredible outlier in an otherwise reasonably reliable trend. Before moving on let's dig into the curious case of DC United. How did DC United manage to control the ball more than 53% of the time and yield only 16 points? This analysis will point out some of the issues that arise when taking possession statistics at face value.

Six times in 2013 DC United fell behind by 2 goals in the first half of their games. In those games, DC United averaged over 60% possession for the entire game. They lost all of those games soundly, yet dominated possession. That speaks to a clear tactical change on the part of the victors to hunker down in their own half and make it very difficult for DC United to mount a comeback. And that is what purely looking at possession can do, hide the tactics a particular team might employ. The desire to possess the ball might change with the game situation. But that wasn't the only problem DC United had. They ranked 17th in the league in shots attempted per minute with the ball and dead last in the league in shooting percentage. So when they had the ball they were the least efficient team with it. That could partly be due to playing from behind and facing full boxes during their attacks.

If we remove DC United from the chart a much stronger relationship is evident. 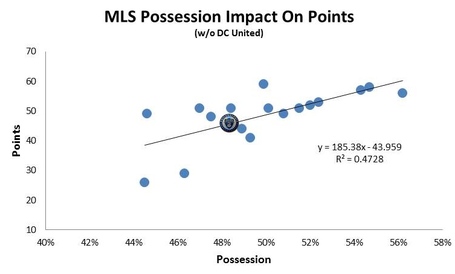 Without DC United, the slope of the curve increases by over 50%. Also notice that above 50% possession there is very little variability around the line. Below 50% there is more variability. That could indicate that teams with lower than 50% possession have less control over the outcomes of their games. They still might be good but there are other factors that are driving that success. Teams with more than 50% possession more clearly control their destiny and have a predictable points outcome. Of course we are dealing with small sample sizes, but those ideas are appealing if true. The lowest points scored of any team with 50% or greater possession was 49 points. While the most points scored of any team with less than 50% possession was 51. There is a clear advantage to possessing the ball more than your opponents. And for every 1% improvement in possession a team can expect to earn 1.85 more points during the season. That feels like a statistic that teams should invest in to improve.

You can see from the previous three charts that the Union were below average when it comes to passes, possession and points. Let's take a closer look at the Union at a game level and see what we find. Below is a graph showing the number of games the Union possessed the ball at given rates. 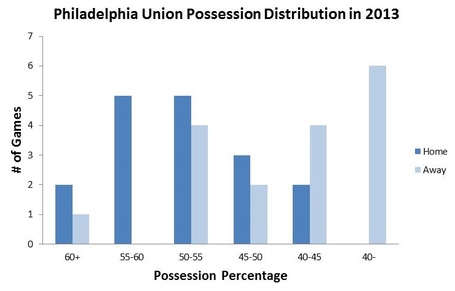 Immediately we see a stark difference between the possession rates at home and away. The Union possessed the ball more than 50% of the time in only 5 away games. And they possessed the ball less than 50% of the time in only 5 home games. Was is a tactical change on the road or were they just more likely to be outplayed on the road? Let's look at how the Union fared controlling the ball at different levels. 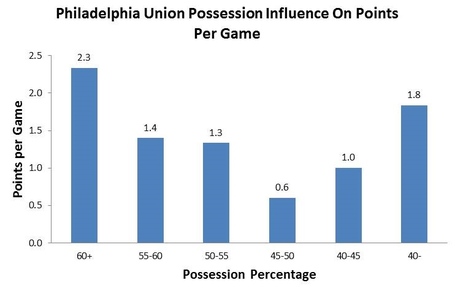 For most of this graph we see that more possession and points per game go hand in hand. But as with DC United, there is a curious case when the Union possess the ball below 40% of the game. They actually were 3-1-2 in those games, earning 11 points. Was that indicative of a purposeful change in tactics to defend their zone and wait for counterattacking opportunities? If so, it was very successful. If that indeed was the intended strategy, what happened during the other 11 games on the road?

If there are times when teams willfully concede possession for strategic purposes, then it would indicate that the ability to possess the ball is an even larger influence on winning than the data shows. We can't know without more detailed analysis of the game. Recent upgrades to the MLSSoccer.com Opta Chalkboards show much more detail about possession and more analysis will be available in 2014.

In the meantime, how do we reconcile the money paid to strikers who don't contribute to the possession of the ball, when we see the clear value of possessing the ball? Perhaps further reviews of more data will indicate we need both possession and a skillful striker to ensure we maximize the value of that possession. We'll continue to use the data we have to look the value that forwards bring to the game. Possession is probably the single soccer statistic that is most predictive of winning a soccer match, but that doesn't mean that forwards don't create value in other areas of the game.

Data sources for this article were MLSSoccer.com and Whoscored.com