The Role Of Luck And Defense In Soccer

The attention and money goes to the strikers, but what role does Lady Luck and hard nosed defense play in soccer? We look at the latest thinking in soccer analytics to find out.

Share All sharing options for: The Role Of Luck And Defense In Soccer

Last year David Sally and Chris Anderson released a book called By The Numbers: Everything You Know About Soccer Is Wrong. In it, they work through a series of rigorous analyses that attempt to dispel common soccer beliefs. The authors don't quite take it as far as Bill James did when introducing Sabermetrics in the 70s, but it's a fascinating read if you are interested in how soccer results play out when you compile the statistics of literally thousands and thousands of games.

One of the more interesting statements they defend is that soccer results are 50% luck. They claim that winning in soccer is 50% skill/strategy and 50% left to chance. One of the key analyses they use to defend this argument is looking at the winning percentage of teams that are favored to win. Soccer by far has the lowest winning percentage of favored teams at under 55% (adjusting for draws) of all major sports they analyzed. The NFL topped the list with 68% win rate among favorites. The idea is that even though the majority of the people feel that one team is better than another there are far more unknowns in soccer that drive unexpected conclusions.

The authors also noted a study that looked at thousands of goals. The study concluded that 50% of all goals developed out of some sort of fortunate occurrence in the play. Ball redirections, lucky bounces and blocks that return right to a goal scorer were examples of goals that were created by chance. The authors also spoke quite a lot about the rarity of the goal and how the low scoring is a key driver of that uncertainty. I'm not going to replay or defend their entire argument but it is worth the read.

But the discussion of luck and its role in soccer got me thinking about an article I wrote a few months back. I had built a model that uses the Castrol Index to predict the expected points a team should earn in that year. The model was quite good (.76 Rsquared) and in fact it showed that the Union should have earned 12 more points on the year then they did. The article asked whether or not it might be sheer luck that was the difference between their performance according to the Castrol Index and their 46 actual points. Well, this book provides another tool to examine just how unlucky the Union might have been.

Before I get into that analysis, I need to walk you through another argument the authors make. This argument relates to the importance of defense. They argue that conceding fewer goals is more important than scoring goals. This is counter to current soccer thinking in that most experts believe that an attacking style of play is the most effective way to win games. And this is only ever so slightly true. The writers simulated a number of Premier League seasons and determined that a team scoring ten more goals would have netted that team 2.3 more wins on average and that conceding 10 fewer goals would have netted a team 2.14 wins (a 7% difference). But given there are draws they also looked at not losing. Scoring 10 more goals in a season would have reduced losses by 1.76 while conceding 10 fewer goals reduced losses by 2.35. Their argument is that defense is significantly more important for avoiding losses while almost as important in helping a team win. This flies in the face of current soccer thinking (apparently).

The data they collected for this argument results in a chart that helped visualize their argument. I also plotted the Union's 2013 data on the chart. The averages in this chart represent the numbers from a decade of Premier League games. 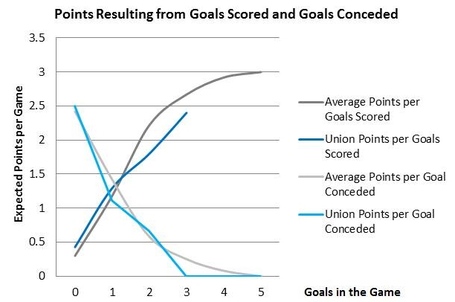 One of their main observations here is that conceding only one goal nets a team about 1.5 points while scoring a goal nets a team just over 1 point. Therefore, they argue, a team will earn more points if they focus more on conceding fewer goals, than scoring more goals.

Another observation from the graph is that the Union dramatically underperformed when they scored 2 or 3 goals. This is due to the 5-3 loss in Montreal as well as the trio of 2-2 draws they had this past season. If they had performed to the average in those games they would have earned 3.5 more points and a spot in the playoffs.

So what are the takeaways? Winning a soccer match might involve more luck than we as fans would like to admit. And defense, which is really the absence of excitement in the world of soccer, looks more vital than we thought. And based on the number of goals the Union scored and conceded they maybe should have eked out another point.

The work in soccer analysis continues to evolve and we'll continue to look at the latest thinking and look at the numbers through a Union lens. Next up we look at the value of possession, shot location and review the Castrol Index in more detail.