After trading down twice and accumulating allocation money, the Union eventually selected Brazilian attacking midfielder Pedro Ribeiro out of Coastal Carolina as the 15th overall pick of the 2014 MLS Super Draft. He is reportedly both big and technically gifted, but does he fit?

The Philadelphia Union, with a pick trade with Toronto FC, selected Midfielder/Forward Pedro Ribeiro from Coastal Carolina. At 6'4", 208 lbs, Ribeiro was a 2013 MAC Hermann Trophy Semifinalist, NSCAA and Soccer America Second Team All-American. In 2013 Ribeiro started all 23 games with 11 goals and 7 assists. Ribeiro is also an alumnus of Union affiliate Reading United. 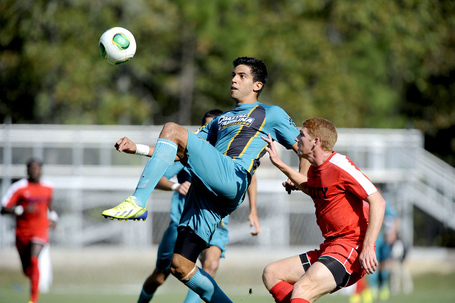 Here is what our Academy and College expert Frank Cobbina thinks about the selection.

The Union kept the fanbase waiting after selecting Blake, trading down twice with FC Dallas and Toronto FC respectively.  When it came time to take a player at pick fifteen, Hackworth selected Coastal Carolina midfielder Pedro Ribeiro.  The Union should be fortunate to drop almost 10 spots and still find a possible top ten prospect in Ribeiro.  Part of the reason Ribeiro slipped to 15 is the fact as a Brazilian, he would take up an international spot.

The Union are well aware of Ribeiro's talent since he played under current Union assistant coach Brendan Burke at Reading United AC in 2012 alongside fellow draft prospect Steve Neumann and current Colorado Rapids striker Deshorn Brown.  Scouts view the tall creative midfielder as the most technically gifted midfielder in the draft.

In his senior season at Coastal Carolina Ribeiro notched 11 goals and 7 assists in 23 matches, helping the Chanticleers to their fourth straight NCAA tournament bid.  He was Big South Conference Player of the Year despite playing injured for much of his final year.  He finished the season as a MAC Hermann Trophy semifinalist.  In his four college seasons Ribeiro finished with 31 goals and 26 assists.

Ribeiro is a 6'4", left-footed midfielder capable of playing multiple positions all over the field, but he will most likely be counted on to fill in a holding midfielder slot.  He's good on the ball and clever at finding passing angles to exploit opposing defenses.  He uses his size well to make it difficult for defenders to displace the ball from him.  He'll need to hit the weight room to build speed and strength before he can make a sizable impact.

I can see Hackworth making Ribeiro come off the bench around the 75th minute to help control the middle of the field and organize the attack.  Ribeiro will need some time to fill out, but when he does I can see him being an important squad rotation player.