Behind the Crest: The Wade Site

In the lot just north of the Commodore Barry Bridge there is a place in the History of Chester that should not be forgotten, for better or for worse. The property's former life as one of the worst toxic waste dumps in American history helped cause the creation of the Superfund site designation, but it's heroes have yet to be honored properly.

Share All sharing options for: Behind the Crest: The Wade Site

The area just north of the Commodore Barry Bridge is still known to locals as the Wade Site. It began being called that after one of the worst non-nuclear environmental incidents in the United States occurred there in 1978. It is currently a parking lot.

The site was initially the location of a rubber recycling plant known as Eastern Rubber Reclaiming. It operated as that from the 1950's until the 1970's. Sometime in the mid- to late-1970's it became an illegal industrial waste dump, and operated that way until 1978. 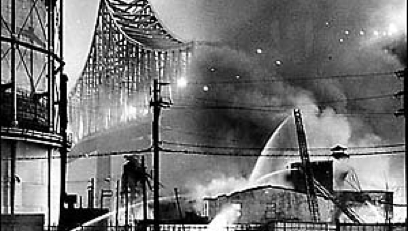 On February 2, 1978 there was a fire at the Eastern Rubber Reclaiming site. As is the usual practice with working fires, police, firefighters and EMS responded to the scene. It was apparent from the start that this was no ordinary tire fire. The EPA estimated after the fact that as much as 3 million gallons of hazardous industrial waste was being illegally dumped and stored on site. The fire quickly became multi-jurisdictional and drew first responders not only from the City of Chester, but also from surrounding departments as well. It's reported that "230 Chester firefighters and other emergency workers were involved" in the response to the blaze.

This incident, in conjunction with similar incidents that occurred around the same time period, were responsible for the creation of the "Super Fund" designation by the EPA.

The Eastern Rubber Reclaiming fire had lasting repercussions that are still being managed to this day. This is far from a closed incident. The environmental remediation of the site took almost 15 years and tens of millions of dollars to correct. The EPA removed the Wade Site from its list of contaminated sites in March of 1989.

The human toll runs much deeper. Approximately 200 first responders worked that "job", to use the terminology of the first responder community. As a result of their services, many of them became ill from exposure to the chemicals illegally disposed of and stored there. The definitive report on the subject appeared in an eight part series in the Philadelphia Inquirer in 2000, and was written by award winning reporters Susan Q. Stranahan and Larry King. The article reports that "Serious illnesses - cancer, vascular and neuromuscular disorders, kidney failure - have afflicted at least 45, about one in five. Of those, 28 are dead."

The original site clean up was conducted in November of 1983 by Roy F. Weston Inc., the predecessor of the Weston Solutions listed under the ownership banner on the Union's website. The EPA identified and sought recompense from a list of companies that would be considered Wall Street royalty. They received it, to the tune of 2.7 million dollars, no small sum in 1983 - but far from the settlements of the other toxic disasters nation wide.

According to the Environmental Protection Agency, the most recent testing (2009) shows that the level of contaminants are equal to or lower than the levels projected in the initial remediation plan. As comforting as that sounds, several highly dangerous chemicals such as Benzene and Acetone are just barely below "acceptable" levels. The next required testing of the site is to take place in September of 2014.

There is an inherent risk involved with being a first responder - it's part and parcel of the job description, and none of those men and women would ever argue otherwise. The dangers encountered on that site went well beyond any definition of "reasonable" or "job related", yet they continued their duties without hesitation.

Surviving family members of several of the first responders who were both present at the Wade site fire and later died from exposure to the toxic chemicals have started a memorial fund. The purpose of the fund according to the groups website and email correspondence with one of the members is to raise money to build a memorial to honor those who paid the ultimate price. According to Ms. Bernice Swanson the group has a site in mind and has raised some money that is currently being held by the Delaware County Fallen Fighters and EMS Memorial Committee, until the group can reach their goal and secure property to erect the memorial. Donations can be made via their site. It would be quite a testament to Union supporters if they could help to honor Chester's forgotten heroes just footsteps from where new ones are being made.