A (Slightly) More Statistical Look at Playoffs in Soccer

Share All sharing options for: A (Slightly) More Statistical Look at Playoffs in Soccer

There's been some discussion on the validity of the playoffs in recent days, with some great articles both in favor of the current playoff system ( http://www.brotherlygame.com/2013/8/22/4636250/single-table-v-conference-why-the-playoffs-are-here-to-stay ) and against, arguing for a single table format ( http://www.brotherlygame.com/2013/8/21/4634894/a-case-for-the-supporters-shield ). There are certainly good points on both sides, and while I personally think both are needed in the US (with more made out of the Supporters Shield) this isn't going to be purely my personal opinion piece, but a more statistical look at playoffs in 3 countries - England, Scotland and of course MLS.

I'll start with Scotland. While there have been a few years of one-off playoffs for promotion to the top league (from memory it lasted just 2 years), it was always 2nd bottom in the "SPL" and 2nd in the First division, and the first division team never won (IIRC). However, in 2006 the first Scottish League playoffs took place. A year before, as a Peterhead fan - I was glad there was no playoffs as Peterhead and Gretna were easily 1st and 2nd in the Scottish 3rd division, and I would have hated to not get promoted because of losing in playoffs. The way the Scottish leagues have their playoffs is that the 2nd bottom of the league above (used to be just relegated) gets "first seed", and the 2nd-4th place teams in the lower league are seeded 2-4. 1st plays 4th (2 legs) and then a 2-legged final, winner gets "promoted" (of course, if the 9th place team wins the playoffs, technically they just stay in the league). This is a similar playoff system to the first 2 years of playoffs in England - so for statistical purposes, I'll include those in the numbers to follow.

The winners of the Scottish playoffs from the Scottish 2nd division and 3rd division are listed above, along with their seedings. The * indicate years when Livingston, Gretna and Glasgow Rangers were all "Relegated" to the 3rd division, and therefore the losing finalist also got promoted. What you can see is that in 4 of the seasons, basically the 2nd promotion spot was taken away (when the first seed wins - the last of which by East Fife denied Peterhead). In 6 of the seasons, the playoffs had no effect on who got promoted, and the old "2 up 2 down" system would have the same result (when 2nd seeds win). In 3 of the seasons however, a "mid-table" team sneaked into the playoffs, and got promoted ahead of the more "deserving" teams.(again, 1 of which denied Peterhead promotion, we are 0/3 in playoffs, I should hate the playoffs right?).

An interesting point to make - because of giving teams the chance to avoid relegation, Albion Rovers have been winners of a playoff 2 years in a row.

After these 2 years - The FA decided to just relegate all teams, and have the playoffs be the "next 4 teams" in the division below. Teams were still seeded based on points, and the other difference with the Scottish system was a one off final at Wembley. The winners are as follows :- 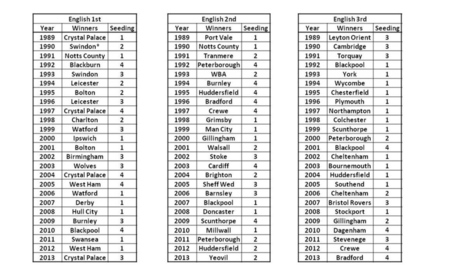 In this system - the team that should have been promoted anyway (first seeds) won 30 out of the 75 playoffs, again 40% of the time (strangely consistent with the Scottish playoffs?). You can see a major reason for this was in the English 3rd division where between 1992 and 1999 the top seed always won. Taking these top seed wins out of consideration, there was no real difference with being 2nd, 3rd and 4th seed, with 14, 15 and 16 playoff wins between them respectively.

While doing the research for this, I found some other interesting points. When you looked at the 2010 season, it was an intrigueing year in English playoff history. Firstly - Blackpool won promotion to the premier league, despite being 4th seed. This made them the first team to win promotion via the playoffs from all 3 divisions. It was also coach Ian Holloway's first promotion via the playoffs, a feat he repeated last year with Crystal Palace. In the 3rd division playoffs - Dagenham also won being a 4th seed. However, take a look at the league table that year:-

After 46 games, Morecambe, Rotherham, Aldershot and Dagenham were far behind Rochdale in 3rd place, yet were only separated by 1 point. you could easily argue that there was very little between those teams after 46 goals, so did Morecambe really fully deserve promotion over Dagenham (1 last minute equaliser may have been the difference that year)? I'd be more apt to say that the playoffs that year were between 4 very even teams than Morecambe should have been promoted.

While my Peterhead are a team that must hate the playoffs - you can look at Crystal Palace as a team who loves the playoffs, having won 4 out of the 7 appearances in the playoffs. Blackpool are another successful team - having been in no more than 7 playoffs, they have got to the final 6 times, and won 4 of them. On the other end of the spectrum - while Leicester have won promotion to the Premier league 2x via playoffs - when they won in 1994, they had been losing finalists in 1992 and 1993. Worse than that - Preston North End have never won promotion via the playoffs, despite appearing in the playoffs in a record 8 years.

Having covered a promotion/relegation playoff - without (hopefully) starting a different argument regards Pro/Rel in MLS, I'll look at the statistics behind the crowning of MLS champs, and the position that team finished in a "Supporters Shield" single table. 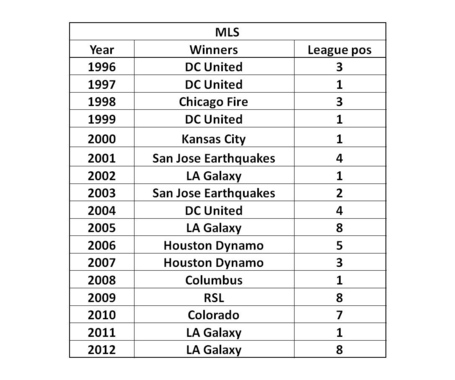 This is obviously far more important regarding the Philadelphia Union. What you can see is that the LA Galaxy, Houston Dynamo, including the winning San Jose Earthquakes and DC United have been very successful at winning in the playoffs, each winning 4 out of the 18 seasons (2/3rds of all MLS Cups between them) . When you look at the Supporters Shield position - you see that the Supporters Shield winners, you see that 6 out of 18 times (33%) the best team in the "regular season" also won the MLS Cup. Interestingly, after that - you are just as successful when you were the 8th best team (worse than mid-table most of the time) than if you finished in any other position.

When you look at all 3 systems, then out of 115 playoff "tournaments" 45 (39%) were won by the team that would have been the winner if playoffs didn't exist. This is by far the biggest "%" compared to the final league positions of other teams entering. Therefore, while there are 61% of times where the winner may not have been most deserving throughout the season, it's certainly a larger number than those against the playoffs would claim. Of course, at the same time - those arguing against the playoffs can certainly say that even 1% of "false winners" is too much.

What does this all mean for the Philadelphia Union? It means that you still have a far better chance of being the MLS Cup Champion if you also win the Supporters Shield, than if you finish in any other position in the race for the playoffs. Therefore that should be the aim for the team instead of "just get to the playoffs". The other thing it suggests is that if we are unable to win the Supporters Shield - maybe sneaking into the playoffs in 4th or 5th place in the East is the way to do it?