The Union stormed to a 3-0 victory thanks to a fantastic performance from Le Toux and a solid shift from the Union midfield. Columbus looked uncomfortable throughout the game but the Union didn't care and gleefully dismantled the visitors from Ohio.

Share All sharing options for: Chalkboard: Breaking Down Philadelphia Union Vs. Columbus Crew

So often mice among lions, the Philadelphia Union’s midfield finally found some bite and in doing so, helped deliver a much needed victory for the home side. A six minute offensive flurry saw the Union race into a 3-0 lead but it could have easily have been double that by full-time.

Columbus may have enjoyed a little more of the possession (they had the ball 54.3% of the game) but last night showed that its not how much possession you have but what you do with it that counts. Indeed, the positioning of several Union players were crucial in frustrating Columbus, whose midfield nous was already dramatically limited by the long-term absence of Eddie Gaven.

Throughout the game, Brian Carroll and Keon Daniel sat deep in the centre of midfield when Columbus were coming forward. At the same time, Sebastien Le Toux and Danny Cruz were playing higher up the flanks, essentially forcing the Crew down the middle because that was often where the more immediate space could be found. Where possible, Le Toux and Cruz were also coming inside to help with the marking, meaning that the Columbus center midfielders were being pressured on all-sides.

Essentially, the Union were allowing Columbus to walk into a small room and then slamming the door behind them.

By playing their wingers further up the pitch, the Union were also pinning back Columbus' own wide players, who had to be wary of leaving too much space for Le Toux and Cruz to run into on a counter attack. It both reduced the number of forays down the flanks for the Crew but also further isolate Justin Meram and Tony Tchani in the middle of the pitch.

Finally, clever play helped smother Columbus' strikers. Several times during the game, left back Raymon Gaddis pushed up a little to deny space for Dominic Oduro to run into. In addition, the spacing from Gaddis and Sheanon Williams served to force Columbus to look for the Ghanian international and his strike partner Federico Higuain in an already congested middle of the park. 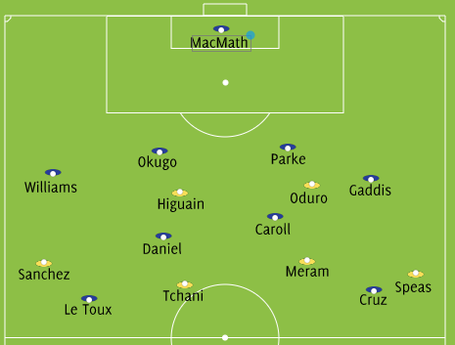 Going forward, the Union did well to harness the chaos caused by Jack McInerney, Cruz and Le Toux. By having three scrambling, direct players who were content to drift into what space they could find, Columbus' defense was being pulled all over the place. In doing so, it opened up opportunities for extra man situations whereupon the Union always seemed to have a player in space because Columbus' back line constantly had to readjust to cope with the Union's free-roaming trio. With the Union's fullback pushing up as well, it would be risky for Ben Speas and Matias Sanchez to come inside and help out as it would open up even more room down the flanks.

Not only was this disorientating, it also allowed Conor Casey, a striker who generally has the subtlety of a brick smashing through a window to occasionally drop back and exploit holes in an increasing stretched Crew defense with a series of excellent passes. Cruz was the most prominent recipient of the big man's unexpected passing in the third minute and really ought to have done better with such a delicious pass. 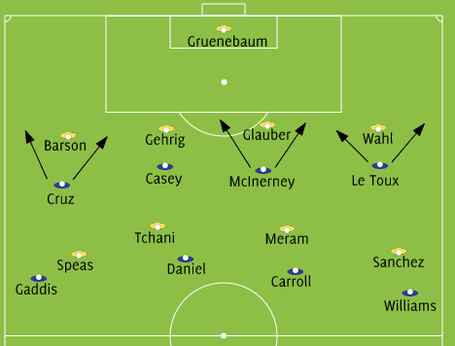 Though the three Philadelphia goals were all somewhat flukey (a giant deflection off Eric Gehrig for the first, no marking on Williams for the second and then Tyson Wahl losing the ball to Le Toux), it shouldn't distract from what can be achieved by a careful use of personnel and an entire starting XI sticking to the plan. The Union could have scored at least another two goals via Cruz and Jeff Parke, and against better teams, improved finishing will be a must.

Should John Hackworth continue to keep this formation, it might be a problem for both Kleberson and Roger Torres. In the case of Kleberson, who turns 34 in two weeks, asking him to bust his buns by sitting deep and relentless harrass opposing midfielders for ninety minutes would be a bit much. Equally, for the swashbuckling Torres, it would be unlikely that his talents could be effectively utilized in such an selfless, high-intensity role.

Moreover, it should be noted that this is not a winning formula for every team. Had the Crew, who were clearly tired and depleted through to injuries and international call-ups, tried to put an extra man in the middle and flood the midfield, things could have been different. Equally, a team that can match the work rate and diligence in midfield could also cancel out the Union's game plan.

That said, given the opposition, the Union were set-up perfectly and dealt with their guests in a ruthless way that gives hope for the future after the international break.