This is a collection of animated gifs from the Union home opening loss to Sporting Kansas City.

Greetings, Brotherly Game readers from around the internet!

I'm Mark Magowan, and I've been brought in to bring you all the goodies you web-surfers so deeply desire. That's right: GIFs.

I've put many hard hours into this internet racket, and now I'm passing on the joy to you all, but keeping it all about the Union, of course.

First, a quick introduction. This is me as I appeared on Saturday. No regrets.

Okay, enough about me...

Earlier in the game, long-range threat Graham Zusi put a shot from way out right on target: Capo and Sons of Ben Vice-President Corey Furlan's drum.

Corey didn't take too kindly to that. Let's zoom and enhance on that platform to see his reaction (NSFW).

This was actually pre-meditated by the members of the Kansas City coaching staff, as noted by their reactions on the sideline 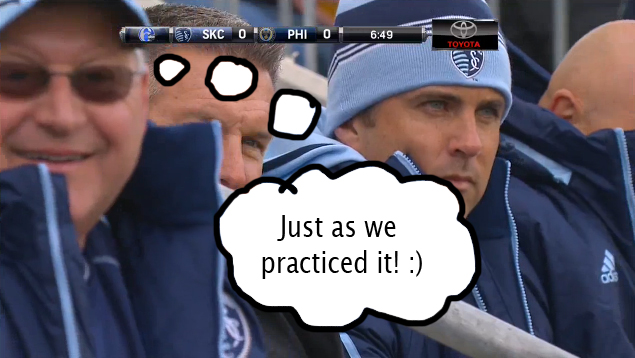 The most fun moment of the game happened when the prodigal son of Philly soccer returned, accompanied by trumpets and cherubs. It went a little something like this:

However, Sebastien Le Toux's blown chance at making it 2-0 stunk, so there's no point in seeing that loop forever. Let's just forget about it, ok?

Late in the first half, the Union conceded a goal to Sporting, who were given ample time to equalize.

Then in the second half, Kansas City made it look easy scoring off a set piece.

The biggest error on this goal was keeper Zac MacMath coming out to challenge but getting no piece of the ball. That never happens, right?

The final goal of the game came off the foot of another wide-open Sporting player.

And that about does it. I really hope your web browser didn't crash while all these loaded. We'll have one of these every week as time permits.