'Stache Bash 2013: It's Bigger, Bolder And Badder Than Ever

'Stach Bash returns for the third straight year. Get ready to help Chester and those it need, while tailgating with fellow fans of the Philadelphia Union.

Share All sharing options for: 'Stache Bash 2013: It's Bigger, Bolder And Badder Than Ever

It's that time again. March 2nd is right around the corner. It is time to bring the coolers out of storage, grab your grills, chairs, tables, and other tailgating accessories, launder all of your scarves, shirts, jerseys, and hoodies, and get ready to head to PPL Park for the Philadelphia Union's 2013 season.

And this season, we open at home!

As soon as the schedule was announced, planning began. The Sons of Ben leadership secured an improved tailgate location, the menu for the first tailgate was planned, beer was purchased, and, as we have for the last two seasons, artists were contacted - 'Stache Bash 2013 was set in motion.

(Tickets can be purchased through Ticket Leap here.)

Just like last year, we will have live music at the 'Stache Bash tailgate. This year we will have an acoustic set performed by Corner Creep Bevan McShea, followed by the Philly's first Philadelphia Union, and soccer specific band, Bearfight (Justin Lee, Jack Craighead, TJ Farley and Mike Sharkansky).

We will be doing the 'Stache Bash raffle again this year, with money raised being donated to Sons of Ben Help Kick Hunger. We have already received donations - see a follow up article for the full list - for our raffle. Anyone looking to donate anything to our raffle, contact our raffle coordinator, Bryan Zebleckes (BZebleckes@gmail.com).

The most exciting part of the 'Stache Bash is the apparel. This year the art work was contributed by Sons of Ben member, Jesse Lorenz. He sent us a few excellent ideas, and after a bit of deliberation, a design was settled upon.

Meet our new SoB, Wolly Willy. Adorned with a Salvador Dali style mustache in the main picture, and multiple mustache options on each side, Willy is ready for a day of tailgating, live music, a few bearfights and to support Help Kick Hunger and the Union. 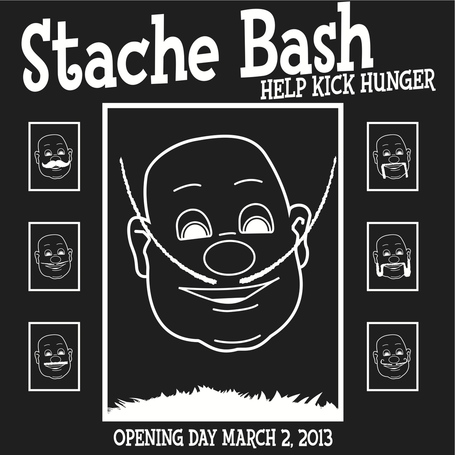 The 'Stache Bash 2013 Wolly Willy is available now through Bark Tees, in a tee shirt for $15 and hooded sweatshirt for $30.

Proceeds from the tee shirt and sweatshirt sales will be donated to Help Kick Hunger.