Bethlehem Steel FC will live once again, if only for a two year jersey cycle.

The former juggernaut of American soccer will return in the form of the Philadelphia Union's new third jersey, which the team will use on various occasions over the course of the next two years. The team has stated that the jersey will be worn by the team for March 2's season opener at PPL Park against Sport Kansas City.

Leaked images of the jersey confirm the Brotherly Game's report from February 11 that had information from sources that said that the jersey would be an homage to Bethlehem Steel and also feature a modified BIMBO logo for the shirt sponsorship.

Additional features of the jersey reference original Bethlehem Steel jerseys, mostly expressed on the bottom left corner of the front side of the jersey, which has the "B" that was the club's logo during its existence, and also the logo more well known through Bumpy Pitch's shirts on the inside collar.

The Union will unveil the jersey officially tonight at a Team Meet at xfinity Live! in Philadelphia's Sports Complex starting at 7:30 pm. 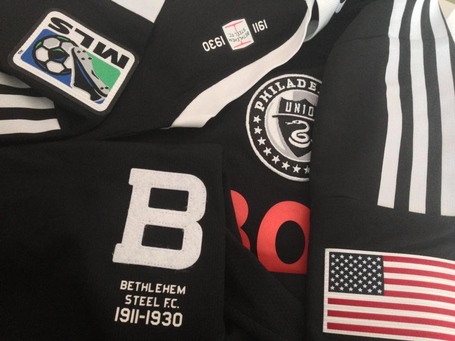 (h/t to @KeatonBK and Big Soccer)