By The Numbers: The Union Forwards

Part 2 of a 3 part series examines what the statistics say about the Union season. The forwards take center stage.

Share All sharing options for: By The Numbers: The Union Forwards

InÂ Part 1 of this series, The Union defense was put under the numbers microscope. Part 2 looks at the offense starting with the forwards. Without looking at the numbers, the word Iâd personally use to describe the forwardsâ season is "surprises". I was surprised by Casey's gritty comeback. His leadership on the pitch, his toughness in the box, and sustained health all earned him the honor of Comeback Player of the Year Finalist (he finished 2nd in the voting). McInerney surprised me by shooting out of the gate as the league's hottest scorer. That start raised the eyebrows of Jurgen Klinsmann and earned him an invite to the US Men's National Team Gold Cup camp. Jack further surprised us by falling off the face of the pitch after his return to the Union. It was a mindboggling change that ultimately symobolized the team's 2nd half downfall. Hoppenot even surprised me by how consistently he seemed to provide a needed spark off the bench. He often fell short of his ambition but you could feel the energy change in the stadium when he was in.

The Castrol Index, the official performance index of the MLS, reflects that performance with high praise of the Union forwards. The weighted score of 596 (out of 1000) is best in the league. In fact they are 45 points higher than the 2nd place Chicago Fire. A numbers post wouldn't be complete without a graph and we need to continue our assessment of the Castrol Index. So here is the chart of Castrol Index and goals scored per minute by forwards across the MLS. 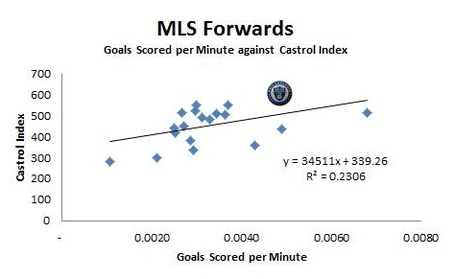 Here the predictive power of the Index is significantly weaker than we have seen previously. Nevertheless, there is a clear positive correlation of Index to goal scoring, as expected. The stat geek in me wants to understand the clear strong linear trend of the 7 teams below the regression line and also what is bunching those teams at the top. And note the Union don't fit into either category. If it's anything meaningful that might be the subject of another post.

To recap what the numbers say about the defense and the forwards for 2013, the picture looks reasonably good. The young Union defense was average when looking at goals against but are young, inexpensive for their production and perform well up the pitch. The forwards also were inexpensive for their production and were of the most efficient forwards in the league in terms of scoring goals. Next we look at the Union midfield, a consistently maligned group, and see if this area of the pitch was the cause of the Union's playoff demise.