By The Numbers: The Union Defense

Part 1 of a 3 part series examining what the numbers say about the Union season. Let's start with the defense.

Share All sharing options for: By The Numbers: The Union Defense

The Union defense is an easy one to like. Jeff Parke, the elder statesman and steady influence in the center, is a hometown product from Abington.

And then there are the 3 other backline starters, none of them older than 23. Ray Gaddis electrifies with his speed and has shown potential in the 2 years on the team. He was put out of position on the left side this year and showed continued improvement as the year progressed. Sheanon Williams is a threat up the entire pitch, and I swear he has the most gorgeous long throw-in I've ever seen. And the last of the backline, Amobi Okugo, still listed as a midfielder on the team site, moved to center back and played so well he started to get mentioned in US National Team conversations.

Then there is the last line of defense, Zac MacMath, who thrilled us with clutch saves and showed a young athleticism and confidence in his first full campaign. Fabinho also played minutes on defense but the starting 4 and Zac played 93% of the total backline and goalkeeping minutes.

But liking this unit is one thing. How did they perform? Looking at the defensive numbers, this unit performed as close to the MLS average as a unit can. The average MLS team allowed 4.33 shots on goal per game. The Union allowed 4.32. The average MLS goalkeeper saved 68% of their shots. Zac saved 69% of the shots sent on frame. The net of those statistics is goals per game. The MLS average goals allowed per game is 1.31. The Union allowed a slightly better 1.29.

The Castrol Index, the official performance index of the MLS, is more kind to the defense. Their average score of 493 (out of 1000) ranks 2nd in the MLS to Sporting KC at 514. The chart below plots the average goals allowed by the weighted Castrol Index for each MLS defense. 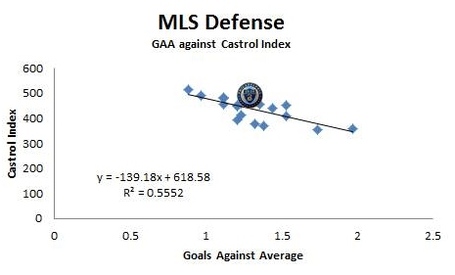 The Union's Castrol Index might indicate they should have given up fewer goals this season. However, the Castrol Index is likely picking up a different capability, and that is a defense that performs well up the pitch. The defense actually led the league in assists with 14, led by Sheanon William's 8. They had a higher goals scored per average defense of 6 versus the MLS average 4.7 (although one of those goals is credited to Fabinho when he played midfield). Maybe this is what we like about the Union defense, a solid defense that performs well up the field.

Finally, let's look at how the Union compensation compares to the rest of the league. Here the Union also fare well. The MLS average compensation for a defense is $1.4M but the Union only spent $1.24M. Below is a chart of the guaranteed compensation given to defenses of MLS teams compared to their GAA. As you can see there is basically no correlation between dollars spent and the effectiveness of the unit performing their number one priority. One other quick tidbit, the Union led the league in dollars spent per Castrol Index point. That means they have the most efficient defensive unit in the league from a cost perspective. Of course, how much you value that news depends on how you rate the Castrol Index. 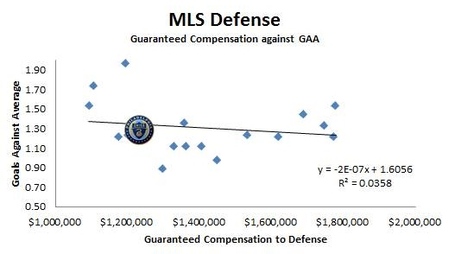 With all of the promising offensive statistics from the defense and the cost of the unit, it's easy to forget that the defensive statistics were very average. Some people may put more blame on the midfield's ability to control the ball but we can deal with that issue in Part 3. There no doubt needs to be improvement for the Union to take the next step. But 4 of the 5 members of this core group are under 24 years old. There is plenty of room to grow and build a defense that will make it even easier for us to love them.