Union midfielder was unveiled by Liga MX side Cruz Azul as one of three new signing all from MLS. Farfan will be joined by LA Galaxy forward Jose Villarreal and San Jose Earthquake Rafael Baca at the Mexican giant

The story was initially broken by Mexican soccer blog FutDEstufas on December 19th. This was followed by stories on ESPN Deportes and the MLS site stating that Farfan, Baca and Villarreal have all gone to Mexico City for medicals with LigaMX giant, Cruz Azul.

Cruz Azul unveiled the players today and made the announcement via social media. 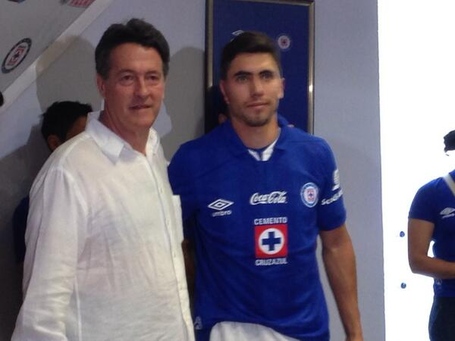 Farfan is the latest casualty of the Nowak era, having been selected in the 2011 MLS Super Draft by the former Union head coach. A U.S. National of Mexican decent, he played his college soccer at the University of North Carolina and was a Bradenton alumni appearing for the US U-17's in the 2005 Youth World Cup.

Michael amassed a total of 83 matches 9 assists and 4 goals in three season with the Union. Last season, Michael was handed the keys to the offense and started mostly as a central attacking midfielder. He failed to show his previous season form for a number of reasons and appeared to be surplus to requirements after John Hackworth picked former another of his Bradenton U-17 players Corben Bone from the Chicago Fire in the MLS Re-entry draft.

Cruz Azul are looking to build on last years second place finish in Liga MX and see the MLS trio as part of their plans going forward. Farfan a combative personality with good close control should fit in nicely at the Estadio Azulas the LigaMX side look to claim their first title since 1997.

A fan favorite at PPL Park, the loss of Farfan has many fans questioning the ambition of the Union after a quiet post season in the market. The clubs salary cap problems are well known and this appears to part of Hackworth's rebuilding plan. The Union's front office have promised "big moves" to the fans on several occasions, one would hope that this clears more cap space for that.

This also raises questions about Hackworth's plans for several youth players like Leo Fernandes, Zach Pfeffer and puts the enigma that is Roger Torres back in the conversation. The Union have also been linked with former FC Dallas creative midfielder David Ferreira.

The preparations for the 2014 season have obviously begun in Chester, the biggest question is about the direction the team is going. The 2014 SuperDraft should go a long way to answering those questions and there will no doubt be significant movement in Hackworth's side before the team goes to Orlando for preseason.