By The Numbers: The Union Midfield

Part 3 of the 3 part series that examines the numbers behind the Union's 2013 campaign. The last part of the series looks at the oft maligned midfield.

Share All sharing options for: By The Numbers: The Union Midfield

Following average to positive reviews of the Union defense and forwards, the math can't look good for the rest of what was a below average Union team, can it? Nope. It can't. That's the beauty of math and how it describes this beautiful game. After all, this is a simple game. If you score more goals than you give up, you should do well. But the Union did not do that in 2013. And with that, the midfielders should brace for their statistical report card.

The majority of the minutes were collected by five players; Danny Cruz, Michael Farfan, Brian Carroll, Keon Daniel and Sebastien Le Toux. Together they comprised 88% of this unit's minutes on the pitch. If you recall from part 2, the Union scored only 1.24 goals per game, below the league average of 1.31. The issue did not appear to be driven by a lack of touch from the forwards. The midfield took 66 shots on goal in 2013, just 3 less than the forwards' 69. However, the midfield scored 16 less goals. The midfield scored on just 15.2% of their shots on goal, the 3rd worst rate in the league. The midfield took a reasonable share of the shots too. See the chart below for a look at the distribution of shots on goal by the Union compared with the MLS average. 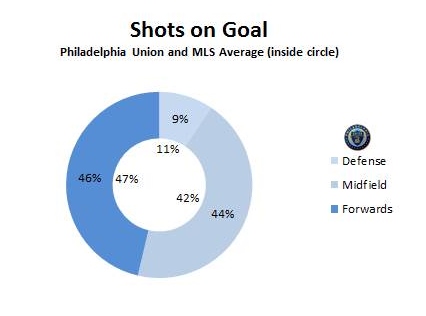 If the midfield had shot the league average they would have scored 7 more goals than they did. That would have made the goal differential for the Union a +5 and the season could have been a different story. What all this analysis of goals, you say? A midfield's job isn't to just score goals. They also play a hand in defense. They control the field and set up the forwards for their glory. True. But let me harp some more first before I look at other factors.

I have tried not to call out specific players in this series, preferring to focus on the unit as a whole. But I think it's important to look at this unit without the production of Le Toux. While Sebastian did not have his greatest season with the Union, he was still a very productive player. And sure enough, when we take Le Toux's season out, the numbers look particularly bleak. The shooting percentage drops to 13%, the league's worst. The goals per minute is the 4th worst at .0007 and less than half of the league average. If its assists you like, the midfield ranked 14th in assists per minute. But taking out Le Toux again they are dead last, assisting at 1/3 the rate of the league average and 22% lower than the next worst team. The production just wasn't there outside of Le Toux.

The Castrol Index, the official performance index of the MLS, is not as vicious towards the midfield as one would imagine. Instead the Index hits them with a flower (pardon my obscure nod to the late great Lou Reed). The Castrol Index scores the midfield at 446 (420 without Le Toux) above the league average of 431. As you can see from the graph below, the Castrol Index has absolutely no correlation with the midfield's ability to score. 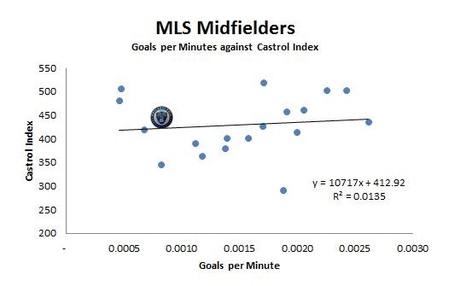 This calls into question what skills the Castrol Index does value in midfielders. Admittedly, the midfielder's task is many faceted. Yet plotting the Castrol index against assists yields the same correlation result. Perhaps the defense is a key factor to the average scores of the midfield. It is hard to discern. 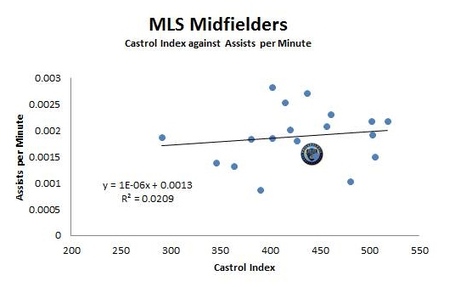 So how were the Union midfielders compensated relative to their production? The average MLS team spent $1.5M on their midfield while the Union spent $1.86M. That was the 4th highest total in the league and the dollar spent per Castrol Index point was 5th highest in the league. That's in sharp contrast to the Union defense and forwards. They had the lowest cost levels in the league for the same metric.

I don't think these numbers surprise anyone really. Addressing the midfield seems to be everyone's chief offseason concern. But this highlights how much work there is to be done and also points out the dilemma added by the budget. The midfield must not only improve production but it must do so at a lower cost. That's a tall task for one offseason. Hopefully the defense and forwards can pull their weight and then some while the midfield starts to follow their lead.