Roger Torres sends a cryptic Tweet and flies back home to Colombia. Is he just home for the Holidays or trying to make himself part of another clubs x-mas shopping list? Here is what we know, and what we can reasonably speculate.

Roger Torres, via his Instagram account, sent a picture of himself leaving the Philadelphia Union locker room with this message 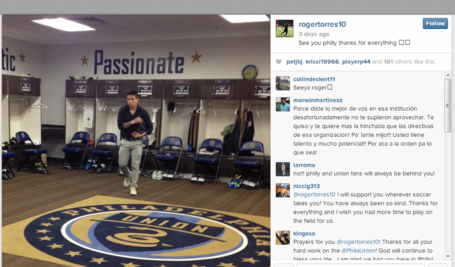 This immediately set the Unionverse on fire with speculation. Its now known that Roger returned home to Colombia. The purpose of his trip is unclear, but its hardly unheard of for a player to return home for a visit during the off season.

Torres contract with MLS is set to expire as of December 1. He was on the field for just 68 mins in 2013.It's no secret that the fans love Roger and that the feeling is very much mutual. It's common knowledge that Colombian National Team manager, Jose Peckerman prefers his players to be performing at a high level in a league that follows a winter schedule. However, Peckerman is the first ever Colombian national team coach to cap a player in MLS. It would be a stretch to call Torres "in contention" for a national team spot and considering the depth at center midfield that Colombia has, it seems unlikely he will be able to put himself on the radar quickly.

Is Roger simply home for the holidays or is he using the off season to look for his next club? In a recent interview with Jonathan Tannenwald, he himself said he couldn't with any certainly say where his future lies.

Who can resist some good speculation over player movements in the off season? Not us for sure. Here is what we think is some reasonable speculation on where Roger may end up if he decided to leave the Union.If Torres does decide to return to Colombia an encore with his former club, America de Cali, looks unlikely. America are currently in the second division of the Colombian league, hardly the place a not quite young man with international aspirations would choose to be. Roger's former teammates Carlos Valdes and Faryd Mondragon have been quite successful on their return to Colombia. They are both currently starting XI for Santa Fe and Deportivo Cali respectively. Certainly a good word from a former teammate is enough to get a look?A player with Torres' skill could be useful in many places. So why not a move to Europe or even Mexico? The US actually has one of the most lenient policies in world soccer for granting a foreign player a work visa. Without consistent playing time or national team caps over the last year, a move anywhere outside of MLS or Colombia would be very difficult if not entirely impossible.Should Roger stay or should he go? Take our poll and tell us why with a comment below.