Now the the 2014 MLS schedule has been released, here's the break down for the Union.

Yes, you heard right. The 2014 MLS Schedule is not late because they released it 2 months earlier than usual. 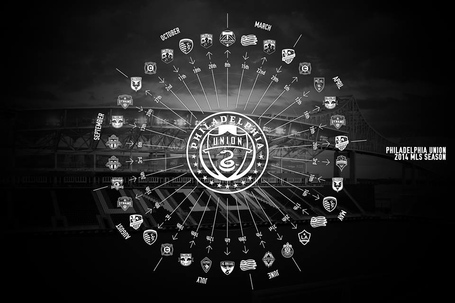 Now, we'd like to analyze the team matchups - who the Philadelphia Union are facing in what order, and how well it would go - but MLS hasn't even finished the 2013 MLS Cup match yet, and the off-season drafts are only just beginning. All we can really do is see how the schedule could effect the team and any expectations.

1) A season of halves - Before the World Cup break in June,the Union would have played 16 games. 7 home games and 9 away. Of those 16 games, they will have played 6 Western Conference teams, 4 of them being away matches. None of these matches consist of back to back home games, although there are 2 back to back away games - Montreal followed by Seattle, and LA followed by Chivas.
After the break for the World cup, the Union's schedule is more Eastern Conference and home heavy, consisting of 18 games: 10 home, 8 away. 15 games are against Eastern Conference clubs: 8 home, 7 away. There are 4 blocks of consecutive home games, 9 in total .

2) Non-Saturday Games - The Union have 4 Wednesday games, 3 of which fall directly between weekend matches. Their final Wednesday match occurs after a week break, facing TFC home and away within 3 days of eachother.
There are 3 Friday matches, all being away games, and one Thursday match on October 2nd which is at home.

3) The end season stretch - Of the last 10 games of the season 7 games are at home. The last 9 games of the season are played against only Eastern Conference teams, and in those matches the Union play 2 teams twice. If there is any point during the season that could make or break the Philadelphia Union, assuming they did as well as this past year and are in the running for a playoff spot, this would be that time.

The Union should also have, at least as of now, 8 national television spots - 4 being on NBCSN, 2 on ESPN2, and 2 on Univision Deportes.