Behind the Crest: PPL Park

In the second installment of Behind the Crest, we take a quick look at PPL Park, from inception to what still could be.

Share All sharing options for: Behind the Crest: PPL Park

In the first part of our series Behind the Crest we took a look at the ownership group of the Philadelphia Union, and the individuals behind Keystone Sports Entertainment LLC. Part two will focus on the biggest asset of any franchise, the facility.

PPL Park, like every new sports structure was far from a complete idea from the onset. According to various sources, at the time MLS was looking for a 16th franchise, St. Louis was also in the running for the spot. A suitable ownership group and funding for a soccer specific stadium was the ultimate point of separation between the two. MLS initially looked at a site in Bristol, Pennsylvania as a possibility before identifying the ownership group. Once Jay Sugarman entered the picture, Rowan University in Glassboro, New Jersey (half an hour south of Philadelphia) proposed a partnership that would allow for a multipurpose stadium to be built on their site. The proposed project failed because the New Jersey State Legislature failed to approve the public portion of the funding.

Ultimately a new site was identified - the Wade Site in Chester, Pennsylvania. With the help of regional development powerhouses the Buccini/Pollin group, a motivated municipality, and former Chester mayor Dominic Pileggi who was now the Pennsylvania Senate Majority Leader, the public portion of the funding was approved on November 14th, 2007.

The Wade site was procured and with the state funding approved, Philadelphia's as yet unnamed team would have a brand new soccer specific stadium to call home.

The Wade site, as it is known because of its former owner, Melvin Wade is not without a history of its own. That history is part of the place but not the franchise itself and will be covered in part three of the series, as it most certainly warrants its own space.

The initial plans for the site included residential and commercial properties and were approved on the basis that it would be the cornerstone of a waterfront revitalization project called Rivertown, which would be very similar to what the Buccini/Pollin Group had done for Wilmington, Delaware's waterfront. The Wharf at Rivertown is managed by BPG and currently houses four companies: Synergy, AdminServer, Wells Fargo Auto Finance, and Achristavest. There has been no residential or further commercial development on the site. From the image below you can see what the initial plans for what is now parking lots B and C. 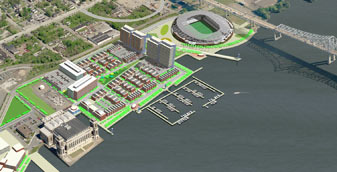 The stadium itself was designed by Rossetti Architects, of Southfield, Michigan, and constructed by T.N. Ward of Ardmore, Pennsylvania at an approximate cost of $122 million. Jay Sugarman and Keystone Sports Entertainment LLC. contributed $49 million toward the cost of the stadium project. Keystone also received $43 million from the State of Pennsylvania and $30 million from Delaware County toward the costs of acquiring the land and building the soccer stadium. The Delaware River Port Authority provided another $10 million for infrastructure needs, such as roadways and sewers, to serve the entire development. What percentage of the cost was paid up front and which parts were financed is not available. The club infers in public interviews that the stadium is not paid off, so it's safe to assume that at least the private investment by Sugarman is financed.

Construction officially began on December 1st, 2008, with a groundbreaking ceremony attended by MLS Commissioner Don Garber, the principal owners of the club, state and local officials, and the Sons of Ben. Despite the recession and its effect on the capital of the ownership group, who as we now know were all heavily involved in real estate financing and development, the stadium was built as originally planned. The stadium officially opened June 27, 2010.

PPL Energy Plus purchased the naming rights for the Union's stadium in 2010. The deal was reported to be for 10 years with a $20 million dollar price tag.

PPL Park officially seats 18,500 and the field dimensions are 120 x 75 yards, which conforms with FIFA's Laws for International matches. It has 30 luxury suites, and a full service restaurant. It routinely hosts rugby and lacrosse matches.

The stadium was built with the ability to expand to accommodate as many as 30,000 seats and the Union's front office have spoken on multiple occasions about initiating the second phase of expansion. The Union can boast a 96.58% capacity for the 2013 season, down only slightly from the 2012 attendance figure of 97.58%. Considering those figures, one would expect the expansion to happen sooner rather than later.

In 2011, there were rumors of Villanova University partnering with Keystone to use PPL Park as their home football stadium as part of their plan to enter the Big East and college football's Bowl Championship Series (BCS) - the top tier of college football in the United States. This was greeted with much resistance from the Union fan base via social media. There have been no further developments on Villanova joining the Big East, and while the deal to move Wildcats football to PPL permanently seems dead, the stadium hosted the annual matchup between Villanova and the University of Delaware in 2011 and is set to host it again in 2013.