When the Seattle Sounders signed Clint Dempsey this past season for $6.86 million dollars per year I am sure I shared the feeling of pure jealousy with most of the Union fan base. After all, Dempsey's annual salary alone was roughly double the Union's publicly reported guaranteed salaries for 2013. I began to wonder, would the Union ever be able to afford a player of that magnitude? On the plus side, Philadelphia is an enormous sports town and is significantly bigger than Seattle. On the down side, Philadelphia has four major sports teams that rank above Soccer in the American sports hierarchy. Seattle has only two major sports teams.

The first thing to state is the obvious. Signing a player the caliber of someone like Dempsey is purely a financial decision. The question is will the Union ever make enough money to afford a Clint? And what would they need to do to get there? Good news is already starting to surface about the Union's salary budget for 2014. Recent articles suggest that 2013 might have been uncharacteristically low salary year and the 2014 budget will be higher. Dave Zeitlin, reporting on MLSSoccer.com, quoted Coach Hackworth as saying, "We knew we had to get through [2013] with serious financial constraints." The guaranteed salary in 2012 was nearly $1M higher than in 2013 which indicates the Union have room to invest in players. But how much do they need to afford a star player?

Without direct access to the Union financials I'm going to have to make more than a few assumptions. This is hopefully an obvious disclosure, but what I'm about to present in no way reflects actual financials. These are my estimates based on data I was able to find on the web.

When looking at payroll we have 3 benchmark teams in the MLS to look up to (but not like); Seattle, the LA Galaxy and the New York Red Bulls. September's published salary numbers indicated that those three franchises average roughly10M in guaranteed contracts. There is much we don't know but let's assume that's the target salary level that we will need to net the Union a high caliber star or two (the likes of Cahill, Henry, Donovan, Keane, or Dempsey). Look at the chart below to see why these franchises are the target franchises. With the exception of the massive attendance for the Sounders which will make it easy for them to pay $10M in salary, let's examine how the LA Galaxy and New York Red Bulls can afford so much. 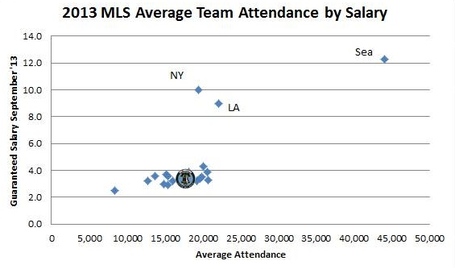 There is a lot we don't know about how MLS franchises make money but I'm going to assert their biggest revenue drivers are in four categories; 1) ticket sales 2) other in-game revenues like parking, concessions and merchandise 3) national TV revenue sharing 4) and local TV and radio revenues. Let's go one by one.

Immediately we can see what sets Seattle apart. It's a wonder it took Seattle this long to spend $10M per year. As for LA, NY and Philly, the revenues are pretty close. Given the star power of the Galaxy and the Red Bulls, they are likely able to charge higher ticket prices. That could increase this revenue between the them and the Union by a million or two dollars.

2) Parking, Concession, and Merchandise - These numbers are nearly impossible to get. But there was a Deadspin leak of a few Major League Baseball teams' detailed financials from 2007 & 2008. It shows that baseball game concessions were roughly $5 per attendant per game. You could argue that soccer is less conducive to concessions since there are fewer breaks in the action. But then there is also inflation since 2008. Let's call it even and $5. As for parking and merchandise I'm willing to call it $10 even per spectator per game since I can't find the data. If I'm a few bucks off it won't change the story much.

After factoring in non-ticket game revenue the story is pretty consistent. We're just $1mm behind the Red Bulls but spending over $6M less in salary. No doubt concession and ticket prices are higher in NYC which could drive that difference higher, but not $6M higher. More work left to find the gap.

3) National TV - The MLS has national TV deals with three networks; NBC, ESPN and Galavision. The deals through 2014 net the MLS $10M from NBC and $8.5M from ESPN per year. I wasn't able to find the Galavision numbers but they also broadcast 20 games. I saw on whatyoupayforsports.com that the MLS gets $27M in broadcast revenue per year. I'm not certain that Galavision is paying $8.5M for 20 games like ESPN is but let's go with it. Let's also assume each team gets an even share of the pot. That's $1.35M per team per year.

4) Local TV - This is the tricky one. I could not find any data on this so I may end up being far off. The Union's press release on their latest TV deal did not disclose any financials but it did say the agreement was for 27 games per year. In the absence of data, I am going to compare baseball national and local deals and then estimate what local MLS deals might look like for the 4 teams.

I am using ESPNs national deal with the MLB because the game content is roughly similar to the MLS. The ESPN deal is heavy on regular season games and light on post-season. Whereas FOX and TBS have very expensive deals, they are almost solely playoff based.

For the local MLB local deal comparison I selected Houston because the market size is similar and the cable provider is the same.

The local Houston deal per game is 7% of the national per game average. Interesting?

For this local MLB deal comparison I used the LA Dodgers recent deal. I think it's tidy that LA is represented here for the Galaxy as well.

The Dodgers earn 3.5 times what the Astros earn per game. I will assume this will be a consistent ratio for the 3 big market teams in the MLS versus the Union.

This of course only tells half the total profit story as there is no cost information here. We know the Galaxy, Sounders and Red Bulls spend roughly $6.5MM more than the Union on salary but I don't have any information about other costs. My assumption would be that the Union have an advantage in cost structure, but that certainly may not be the case.

So where does this leave us dreaming about the next Clint Dempsey? Well it appears we are at least $3M in revenue short per year and likely more given some conservative assumptions for LA and NY. If we assume ticket and concession prices in LA & NY are a good deal higher the gap may look more like $5M. Seattle is in a revenue stratosphere all to itself and I think we can expect their payroll to climb as the MLS gets more comfortable with that market.

The reality is the Union have limited short term options to add $3M-$5M dollars to their revenues. The seating capacity is limited to 18,500 and attendance is already close to that number. They could increase ticket prices but that might deter a fan base that needs to grow. The only other way they will be able to make up the $3M-$5M gap and push closer to signing a prominent player is to multiply the revenue from local TV. To grow TV revenues we need a lot more of this sports crazy market to love this team the way we do. While possible, I believe it's going to take quite a few years for that to happen. In the meantime, if you're not spending your $36.50 at the game, let's watch the rest of those games on local TV or mobile. Our future Clint Dempsey depends on it.