Diary of a Bearfight FC Wife

The newly created (and completely fan owned) BearFight FC has been making its mark on the Intercounty Soccer League. While still in its infancy, this is a dream come true for the players and their families. Their journeys are just beginning.

Share All sharing options for: Diary of a Bearfight FC Wife

So many of us sit in the stands at PPL Park and pour our raw emotions out while watching the boys in blue try to make their way into the 2013 playoffs. While many of us could only dream of getting the chance to play at ANY level of professional soccer, there are a handful of Union fans who have gotten that chance through the Bearfight FC of Wilmington.

Having just started their inaugural season, the team is already showing marked improvement, an unrivaled tenacity, and one heck of a growing fan base. What follows is a recollection from Anyelit Gonzalez. She is the wife of BFFC's starting player, Wilson Grisales. This is a story that is just beginning, but it is the fulfillment of a dream that is certainly going to have a lasting impact on this family forever. 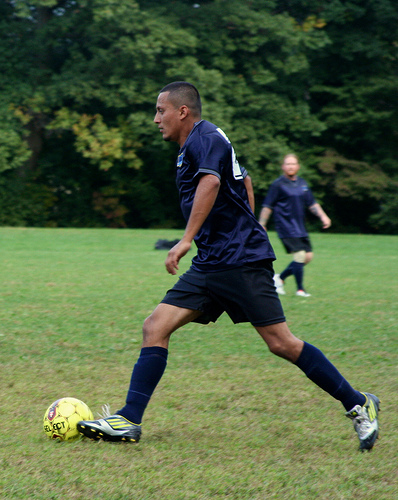 My husband Wilson came home telling me that his friend JC called him telling him about this new soccer league. My first reaction was negative; I didn't really like the idea because it looked like it took a lot time from family time. However after a day or two I noticed a change in Wilson. Wilson was becoming more active as the days went by. Prior to the call, Wilson would come home from work and lie down on the couch and watch TV. I noticed he would come home from work and tell me he was going to play soccer with friends at the park not too far from our house. Wilson was very excited and energetic; I really liked the person my husband was becoming. I then started to change my thoughts on the idea and help him out because I realized that becoming a professional soccer player has always been one of his dreams. I made a promise to myself that I would support him throughout this journey to make his dream come true and I will keep that promise.

Four days went by; Wilson got an email asking for all his size information so they could order the uniforms. Wilson asked me to help him respond, and so I did. As I typed, I glanced at my husband's face and saw that he was very happy. After the email was sent, Wilson would constantly check his email. When he finally got a reply, he came running up to me telling me that they wrote back. The email was confirming that he was eligible to come to the tryouts and that he had to print out some papers. I remember I was washing clothes when he came and asked me if I could print out these papers for him and fill them out because he needed to bring them to the tryouts. The tryouts were on August 29, 2013. The next day I get a message from JC telling me how he would like me to keep a journal about Wilson and all the preparation so that our personal story could be told. and so that's why I'm here writing. JC wanted Wilson to write a journal as well, but Wilson isn't the type of person to express his feelings on paper, so I'm trying my best to describe his feelings as well.

That same day JC told me something that got my attention. He told me that Wilson had stopped smoking. Wilson never smoked around me or the girls, and he denies that he smokes but we all know he does. Knowing that this made him stop made me want to support him even more.

Today is the tryouts and I think I am more nervous than Wilson is. He seems very calm and confident--I asked him how he's feeling and he told me he's feeling okay. He asked me numerous times if I was going to watch him play and I would say that I'd be there at every practice and every game.

Now we were off to the tryouts, the tryouts were in Wilmington, DE so it was about a 30 minute drive. As he drove, I could see his face growing with excitement. When we arrived at the park where the tryouts were being held at, Wilson went up to the Justin who is one of the team leaders, and gave him the papers while I made my girls and me comfortable. As we waited for the possible candidates, I kept praying that he was going to be one of the keepers. Finally they started the tryouts, and my husband played like a pro. I felt so proud of him and even started to cheer him on. On the break he asked me "how did I do?" I told him that he did great! That he was one of the best. The truth was, there were few good players and I could probably count on my fingers. After the break, they continued with tryouts, and then they played a game. I really enjoyed watching Wilson running through the field, he is really good. When the tryouts had officially finished, Wilson came up to me telling me how he had a feeling that he was going to make the team, I agreed with him. A little after he told me that, Justin had an announcement to make. He said that there was one person that was a definite team member already and everyone else who was going to make the team would be contacted within 72 hours. I really do think that person was Wilson. I remember telling him how I think that one person was him, and he seemed to believe me! On the way home he told me how one of the coaches would call him Roger Torres because of how he looks and plays! I thought that was amazing because I know that is one of his favorite players from the Philadelphia Union. I could tell he was so happy!

On Friday afternoon I got a call from Wilson and he says:"Mami guess who called me!?" At that moment I wasn't really thinking so I really didn't know what he was going to tell me. So then he tells me that Justin called and told him that he made the team and he wanted to know what number he would like to be! I remember telling him "I knew it! I knew you were going to make it! I knew you were the one they were talking about!" When he came home, the girls and I showered him with big hugs! We were so happy for him! I remember immediately calling my best friend Marilyn and my parents about the news! And then of course, I had to post it on Facebook! His first practice was on September 4th, 2013. I couldn't wait to be a soccer wife!

I woke up feeling excited about the practice; I woke up telling my girls to wake up because we were going to Daddy's first practice! It was their first practice as a team so it was nerve-racking. I couldn't for practice to start and neither could Wilson. When it was finally time, off to the park we went! When we got there, we saw a few other players that we saw at the tryouts. They all seemed very eager to play! As I sat there watching them play, I sat there thinking to myself how wonderful of a player Wilson is! I also started to wonder if he always played with this much passion or was it because his family was here to support him. At last the practice was over, they had a great practice. At the end the team received their uniforms. I remember Wilson running back to the car telling us how he's number 20 and showing us his uniform! The uniform was white and black. Wilson has played in other teams and has had different uniforms but today was different because he told me he had a feeling that this would be the beginning of something new.

Today was game day! It was Bearfight's first official game! The only thing was the game was so early in the morning and I'm not a morning person but I didn't care, I made a promise! So I woke my girls up that Sunday morning and took off! They were playing against Upper Moreland Rebels. It was another 30 minute ride to get there. When we got there, the field was marvelous! It was so big and spacious! As all the team members got there, we made ourselves comfortable. As they started playing, I looked at Wilson's face and once again I saw how happy this made him and made me realize that how happy that made me and my girls. Surprisingly there were a lot of people in crowds that came to cheer Bearfight on! Unfortunately we lost 5-1 but all the boys played a great game and that's all that matters! There will be better times and much more victories! I'm looking forward our next games and buying shirts to support the team even more!