If you're expecting a discourse on why the 4-3-3 formation is wrong for this roster, well, best get used to disappointment. 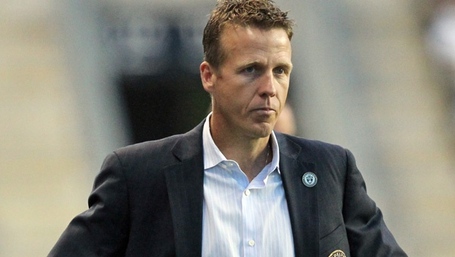 "This shit is hard." via www.mlssoccer.com

On July 2nd, the Union released/fired/dismissed/accepted the resignations of and generally parted ways with Diego Gutierrez and Alecko Eskandarian. Their duties were "split amongst remaining personnel". I'm not going to debate the worth to the club of each individual, but I will debate that eliminating the head of scouting position is a tremendous mistake.

Out of 19 clubs in MLS, 5 have a coach who also assumes GM or Dir of Soccer Operations responsibilities (if you said Director Sportif, well just shut your hipster piehole). Besides John Hackworth, there is Bruce Arena in LA; Gavin Wilkinson in Portland (had been the GM, added Interim Manager role after John Spencer was fired); Peter Vermes with SKC and Paul Mariner in Toronto. Only Arena and Vermes are currently experiencing success, the other three hold down 3 of the bottom 5 spots in the Supporter Shield standings. No one else undertakes the additional role of head of scouting. No other club devalues the role as the Union do, and the Union are paying for it.

Since the regime change, the Union have brought in two players - Bakary Soumare in an allocation order trade with VAN and a deal with DCU for Danny Cruz with Lionard Pajoy and an int'l spot going the other way. Soumare doesn't quite count as Nowak was the architect of that deal. I mention this mostly because Nick Sakiewicz stated earlier in the season the Union would be very active during the just completed transfer window in an attempt to turn this dismal season around. Instead, the Union stayed on the touch line as the rest of MLS saw Giles Barnes, Juan Toja,Matias Jara,Darren O'Dea, Andy O'Brien,Federico Higuain, Tim Cahill,Kenny Miller,Alessandro Nesta,Jerry Bengston,join the league. Notable players switching teams included our old friend Sebastien leToux, Eric Hassli, Mehdi Ballouchy, Shalrie Joseph, Donovan Ricketts and Troy Perkins(again!) moving to other MLS clubs. And the Union traded their one target striker (debatable, like being the tallest midget in the circus,but still) for another diminutive, though talented, midfielder.

How can it be that so much talent moves past the Union? Can they not afford it (very possibly)? Or is the fact that Union have one of the smallest F.O. staffs in MLS to blame? A lack of a separate General Manager does not seem to be helping. A lack of a director of scouting does not seem to be helping (did you know Montreal has a scout just for Europe on their staff?).

So rejoice if you must that the Union have declared Hackworth the "permanent" manager, but weep as we watch not only the learning curve of a too young club get outmatched every week, but a too inexperienced manager get outmatched in the front office.