Share All sharing options for: A Fan's Voice: Saying Good Bye To Saint Danny Of Philadelphia

In only the third year of the Philadelphia Union's existence, our worst nightmare came true. Our club lost to the New York Red Bulls at home.

For the crew of hardcore supporters that were at Stoney's, the fact that our side played one of the better 90 minute matches we had seen in a while and the fact that a group of young guns help close - playing with 10 men for most of the game - meant nothing.

We lost to Red Bull at home. It is the day we feared.

Regardless of being down a man, or having a squad that, with the exception of a few members, are not allowed to rent a car, the unthinkable happened. A loss to our mortal enemy on our home soil.

The Pub, our Winchester, had the feel of a waiting room after a doctor tells you someone had died. Words weren't being spoken, only sad stares of men and women were seen. All of them share a deep love for their club, which had just had their hearts ripped out.

We had hit a low, this was rock bottom. Or so was the thought going through the minds of the men and women assembled at the pub.

Today, however, was different than most match days. This was Mother's Day.

Everyone at Stoney's had a phone call to make, a dinner to attend, or a gift to drop off. They were there because one of their own, me to be specific, had asked them all to come to Stoney's post-match.

I am not going to say that I was carrying the heaviest burden in the room, but I know that I felt a lot of weight on my shoulders for the past 24 hours.

There was no grand ceremony, but slowly words were spoken between the men and women in the Pub. They are not just friends, I see these folks as my family. We had to, as a family, face another tremendous stress.

We had heard the rumors and speculation. We had talked before the match and had been assured that everything was fine. Unfortunately, the subterfuge could not last forever.

We knew, with those select words, that we were saying good bye to another member of our family. There was sadness, there was anger, there were tough men reduced to tears and loquacious people left without words.

Even though the news was not official, as there had yet to be a press release, our Captain, our family, had been shipped to Chivas USA. We didn't know all the specifics of the deal, but to us it didn't matter.

Our first leader, our first on field warrior, the soul of our club, was unceremoniously dropped by our Front Office. And the night was just beginning...

Danny was on his way.

Just like the gentleman that we had all gotten to know over the last two and a quarter seasons, he didn't want or need pomp and circumstance. As was the way he led our squad, the moment was understated and modest. Danny wasn't even comfortable with calling it a send off.

Danny was always humble, always just one of us. He just wanted to hang out with some friends one last time.

I tried my hardest to muster up the courage to channel my inner Corey Furlan and give the kind of speech that Corey gave to Seba when he left us. Instead, all I could say was something to the effect of, "as we all now know, Danny is leaving us. He is our first captain, and the heart and soul of our club. Thank you for all you have done for us. You will be missed."

At least that is what I thought I said. In reality, I think I got a few words out and got choked up.

December 8, 2009, a group of Union fans descended on Tir Na Nog in Philadelphia to meet our first Union players. Danny had yet to arrive in Philadelphia, PA from his most recent club, FC Midtjylland of the Danish Superliga, but his name was announced to ruckus applause from the Union faithful.

We had already fallen in love with the former LA Galaxy and San Jose Earthquake player, and were excited for his return to MLS. He was the type of player that would represent Philadelphia well.

His rough exterior of mohawked hair, Wolverine style sideburns, and full arm tattoo sleeves, a player that, although not the fastest or most technically sound player on the pitch, would play with his heart and do whatever was asked of him for his club. He also would embrace the supporters as the soul of the club, and give us his all every time he was on the pitch.

Danny truly bleeds blue and gold, probably more than any of us. So often when any of us talked to him, he spoke of his goal of winning the MLS Cup for this club and for it supporters.

From setting a physical tone of this franchise on April 14, 2010's ‘People's Elbow' incident, to hugging Chris Seitz on June 27, 2010 after Seitz stopped a penalty kick at the first ever home match at PPL Park, to him showing up at ‘Stache Bash 2012, no. 4 always felt the heartbeat of this club.

He lived and died for the blue and gold. He was what the Captain. He was Philly.

He played with his heart on his sleeve. He played with emotion. He was both mellow and short tempered at the same time. He could be modest, but also not afraid to speak his mind. He lived for his club. He came out to supporter gatherings. He would sign an autograph for anyone who asked.

Even at the gathering that was dedicated to making sure that Danny got the proper send off he deserved, he still remained humble and in his own way, reminded us that this club is our club and that the true soul of the Union lies with us, the supporters.

All of us at Stoney's, and anyone that has cheered on the Union, were deeply affected by Danny, not just as a player, but as a friend, as a part of our family. When asked, various fans answered why Danny meant this much to them.

"Whether you knew him personally or connected with him through his performance on the pitch, Danny Califf made an impact on every Union fan in their own way. " said Sons of Ben member, Kelly Delaney. "His dedication and gratitude to the fans is indescribable. He understood that this group, this club, is MORE than just a team to the supporters and always treated it as such. To many people, including myself. he was exactly what this club embodied. Someone said it quite well the other night, ‘we've lost the soul of our team this year.'"

Earl Gardner, Sons of Ben, Bearfight Brigade, photographer for Philly Sports Page, and YSA podcaster, lauded the relationship with Califf in a similar way to Delaney, discussing the special nature of his time in Philadelphia.

"I always imagined (and hoped) Danny would retire in Philly," Gardner said. He is the kind of player and person that fit this city so well. After all the players we have lost this year, Danny's departure will be the hardest to take." Earl went on to say, "He was one of us. Down to earth wouldn't even begin to describe him accurately. The Union just lost something that made them special in the first place."

Kiley Sharpe, Union supporter, SoB, and Bearfighter told me,"'Danny was the first MLS player that wasn't shoved down my throat that I was supposed to like, like (David) Beckham and (Landon) Donovan were. He took time to see, talk to, and get to know his fans. In this day and age, any pro athlete that can stop and talk to a child is a great person. Danny played with the grit and heart that all Philly sports fans want. This team and its' fans will miss him dearly."

Danny got particularly close with Wayne, Justin, myself and the Bearfight Brigade, who saw a lot of themselves in Danny.

When asked for comment, Wayne said, "Danny has always provided a solid, steady, and level headed presence on the pitch. From what I understand, he was well liked and respected by his teammates as well. Losing him when we are letting in more goals than we are scoring is painful and mind boggling."

As far as off the pitch, Wayne went on to say, "Off the pitch, he remained a genuine leader and highly visible face of the Union. He was always someone you could count on to make an appearance (official or unofficial) or sign autographs for the supporters' groups numerous charity events. He is going to be missed by all on many levels. Danny is welcome to Bearfight with us regardless where he plays."

I will never know what I truly said that emotional day at Stoney's when I tried to give Danny a proper send off toast, but I know that what I wanted to say was this:

Please, all of you, the true heart and soul of this club, the people that Danny played for, take a moment and comment on what Danny meant to you, to this club, to the supporters, and to the city of Philadelphia.

I saw the heart and soul of Danny shine through on Sunday, May 13, while we exchanged a good bye hug, I said, "Thank you, again."

Danny looked at me and said, "I don't know why you keep thanking me. I should be thanking you.'" 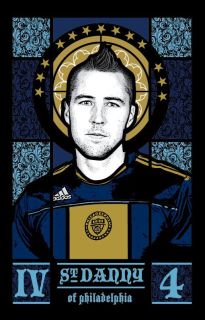