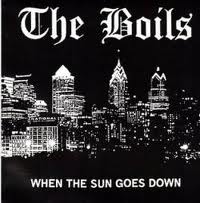 The date has been set (March 18th, 2012). The shirt and scarf have been unveiled and are available for preorder at Barktees.com. The raffle is being organized. The new Sons of Ben tailgate location has been announced.

Never, in my wildest imagination, would I have dreamed of this moment. Maybe I am just a fan boy gone wild, maybe I am excited to relive a young adult memory. Today, the 'Stache Bash takes on a whole new direction... live music.

It won't be just any live music. Sure, we could have found a cover band that played all the greatest hits of Nickleback, Green Day, Oasis, and Jack Johnson. However, that isn't good enough for the Bash. We decided, instead, to find the impossible local band, and bring them together for a live performance.

'Stache Bash is proud to announce that the festivities on March 18th will feature The Boils. The Boils are Philadelphia Union season ticket holders and have aspecial brand of rock/punk/oi.

The Boils entered the punk scene during the mid-1990's, releasing their first EP "When The Sun Goes Down" on Creep Records. The band went on to release "World Poision" and "The Ripping Waters" on Cyclone Records (now available through Thorpe Records).

After a few years on Thorpe, the band moved to TKO Records, releasing the albums "From The Bleachers," "Hockey Anthems" and "Pride and Persecution." The band did a brief stint on Schuykill, re-releasing their first EP, and cut a track on Radical Records, "Never Mind The Sex Pistols, Here's The Tribute."

The band also appeared on, "Everybody Loves ANTiSEEN, A Tribute To The Boys From Brutalsville," a split album with Violent Society, and numerous compilation albums.

The group has toured across American and also did a tour in Japan. Locally, the band is known for a few nights at the now closed Halfway Philly and, more notable in Boils lure, a night before a Flyers game at one of the eateries at the Wells Fargo Center.

After arriving, the band was asked what covers it performed - only a few was the answer. After playing their normal Boils set and fulfilling their end of the contract, they were asked to play more, so they played the exact same set again. They were never invited back.

Over the last few years, the running joke about the band is that they play one show a year, sometimes not even that many. They last played together was June 18th, 2011, with the group Violent Society. With band members enjoying normal lives, and working on side projects, a Boils show is rare.

Throughout the years the line up of The Boils have been constantly evolving. The current Boils line up is Greg Boil, along with River End Section 136's Chris Endrikat, Eric 'White Lightning' Endrikat and John Brennan.

This event could potentially host the only live performance of The Boils this year.

"We're all really excited to play, especially with the opening of the new building, and the great cause that 'Stache Bash [is] to [Help Kick Hunger]," said Chris Endrikat, drummer for The Boils.

"Three of us have had [Union] season tickets since year one, and we couldn't think of a more fun show to play than one with all of our friends from the Bearfight Brigade, Corner Creeps, and SoBs.'

Specific details about the 'Stache Bash 2012 tailgate start time, cost, The Boils start time, and other miscellaneous tidbits will be announced at a later date.