Where Will Coach Nowak Use Newly Signed Freddy Adu?

Share All sharing options for: Where Will Coach Nowak Use Newly Signed Freddy Adu?

Now that most of the dust has settled on the Philadelphia Union's signing of Freddy Adu, one big question remains. The placement of Adu into the Union's lineup will be a big talking point going into tonight's matchup against FC Dallas, and coach Peter Nowak has a couple options as to how to use his young protege.

Adu is essentially capable of playing two different roles which largely depend on who is on the field with him. The main decision that Nowak will have to make is whether to use two strikers or a single target forward. This decision will have the biggest impact on where and how Adu plays.

The first of these options would, essentially, be a continuation of how the Union have played up to now: two strikers up top, two central midfielders, and two wingers. Adu would be the more advanced central midfielder, and he would be backed up by the more defensive Brian Carroll. Nowak would be left with several options at striker; Jack McInerney, Veljko Panouvic, Sebastien Le Toux, or Danny Mwanga could start as forwards, while Justin Mapp and Keon Daniel could take up the wing positions. Le Toux could drop back to winger as well, sending Daniel to the bench.

That lineup would end up looking something like this: 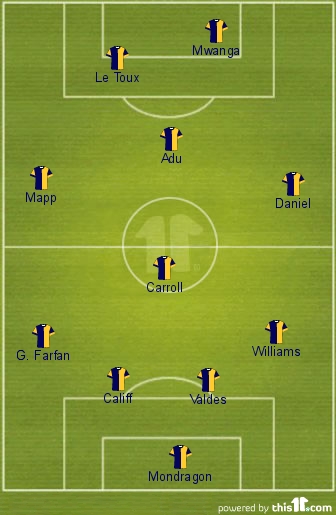 This lineup would give Adu more options to spread the ball around to, and would allow Sebastien Le Toux to remain at striker, where it seems he prefers to play. There is another option, however.

Nowak could opt to use only one true central forward or "target striker," such as Jack McInerney or Danny Mwanga. Freddy Adu would then play behind this player as a withdrawn forward, or second striker. This role is sometimes referred to as a "trequartista". Adu could drop back and distribute when needed, but also move into the box and try to score himself at times as well. In this type of a formation, Le Toux would be cemented into a position on the right wing, and would no longer play as a striker. Another more defensive central midfielder, such as Amobi Okugo or Stefani Miglioranzi, would come into the starting eleven and play alongside Carroll. Here's what it could look like: 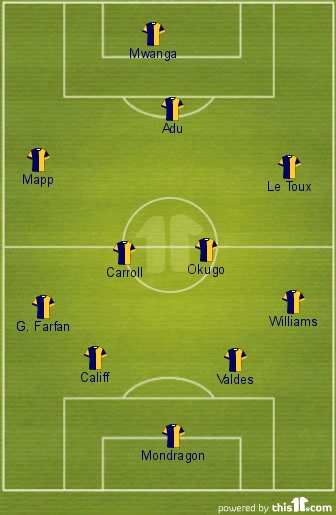 This formation, even more than the first one, would really give Adu the keys to the team in a way that few players have had on Nowak's Union team. Le Toux played in this role at times last year, and seemed to do somewhat well in it last year, but it remains to be seen if other issues, such as Mwanga's ability to play as a lone striker, can be sorted out. Luckily, we may not have to wait long to get our answer, as Adu is reportedly available to play in the Union's game against FC Dallas at PPL Park.

What's your take? Pick your ideal starting eleven for the Union now that they have added Freddy Adu, and leave your answer in the comments section.