The event which was intended to be held at the Lee Cultural Center on 44th and Haverford was moved indoors due to yesterday's scattered rain showers. The clinic was held in the gymnaisum at the Shepard Recreation Center several blocks away on 57th and Haverford. In addition to Meola and Rios, local coaches assisted with instruction throughout the session. 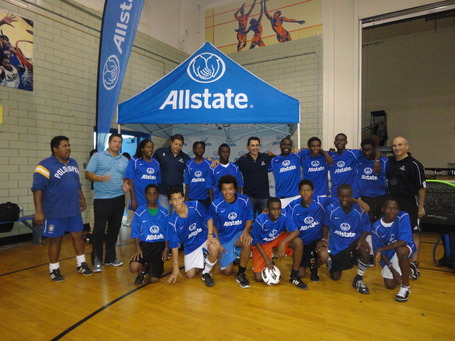 The important aspect of the event was that Meola and Rios did not overtake the clinic. The former professionals allowed the youth coach to run the session while welcoming any insight. Following the youth's small sided match, Meola led a juggling competition as the youth players competed for autographed memorabilia, including jerseys and soccer balls.

If it was not enough to have two former world class players surprise a local club in Philadelphia, Meola and Rios had one more surprise for the team, courtesy of Allstate. At the conclusion of the session, each player was handed a new Nike backpack filled with team apparel and equipment. The players each received a soccer ball, shinguards, and home and away kits.

However, the real surprise was hiding in the small front pocket - two tickets to tonight's match between the United States and Mexico. The facial expressions around the gymnasium were priceless. The free tickets provide an opportunity to youth to witness a world class soccer match, possibly the first for many of them.

Tonight at Lincoln Financial Field for the 2011 Gold Cup Rematch and friendly between the United States and Mexico, Allstate will be hosting a unique question and answer session outside the stadium. Meola and Rios will exclusively discuss the this evening's match and share experiences from their own playing careers. The event is scheduled to begin at 7pm. Also, as a special ‘thank you’ for Allstate customers attending the game, Allstate is offering free VIP parking in the stadium’s K Lot.

For the past fifteen years, the West Philadelphia Hurricanes Soccer Club has focused on keeping youth off of the streets while also stressing the importance of education and moving on to college.