Share All sharing options for: Breaking Down The Union's Game Tying Goal

Carlos Ruiz scored his fifth goal of the season to draw the Philadelphia Union even with DC United late in what would eventually end as a tie between the two teams. 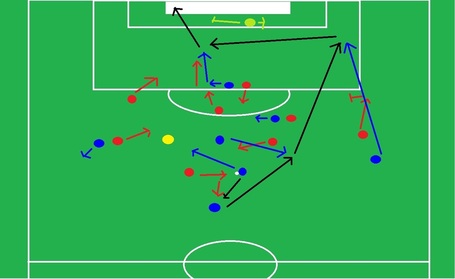 Legend: blue is the Union, red is United, yellow is the referee and the lime green is the goalkeeper.

Gabriel Fafan starts with the ball (signified by the white circle next to the blue circle over the center of the field) with a United midfielder to his left. The first year midfielder pushes the ball back to a waiting Brian Carroll (shown by the black arrow), who moves the ball up the field to Sebastien Le Toux before that same DCU midfielder can put pressure on him.

Le Toux moves into open space to his right, occupying an area left open by a United midfielder who moves over the center of the field to pick up on the shifting Farfan. At the same time as Le Toux receives Carroll's pass, Jack McInerney pushes over the top of the 18 and draws the surrounding players toward him. Ruiz similarly moves to his left and draws nearby defenders towards him.

Looking up, Le Toux finds a streaking Williams on the right side of the 18. Williams had gone one-on-one with Chris Pontius and snuck into the box when Pontius stopped at the edge of the 18. Ruiz began his move toward the goal as well, staying onside.

Williams one timed his cross to Ruiz, who then stuck out his leg and directed the ball into the goal's leftside netting. Bill Hamid, United's goalkeeper, was taken out of the play by the threatening Williams and had no chance of recovery to stop Ruiz's shot.