This weekend marked the grand opening of Seattle Sounders' first team store in downtown Seattle. Simply known as "The Pro Shop," the store will feature products from both the Sounders and the Seahawks of the National Football League. In what appears to be a rare partnership among teams of different sports, the two appear have found the perfect formula for a successful retail store. 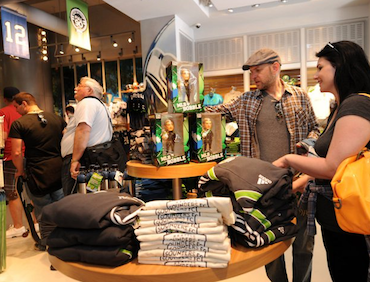 With seasons that briefly overlap in the late Summer and early Fall, a retail space is occupied by teams who together compete year-round. In addition to having the largest attendance in Major League Soccer, the Sounders have also lead the league in merchandise sales in recent years.

Philadelphia supporters however have less of a presence in their hometown, nonetheless downtown. While the team calls Chester, Pennsylvania home, the nearest official retail store in located in Berwyn - more than twenty-seven miles away from PPL Park. The Union's official retail partner, Angelo's Soccer Corner, also has locations in Harrisburg, Huntingdon Valley and Lancaster.

Match days at PPL Park present lines that wrap around the perimeter of the store and often out the door, sometimes just to enter. Likewise, lines for purchasing merchandise extend past the time of kick-off and well in to the first-half.

The team provides few additional 'pop-up' retail spaces throughout the stadium. With limited quantities of merchandise that varies per 'pop-up' location, finding a specific product is not always that simple. Equally difficult are the payment options as many booths turn away customers who are unable to produce cash, which is the only accepted form of payment.

Second retail space at PPL Park appears to be much needed on the opposite part of the stadium to deal with the overwhelming demand and long lines that cause supporters to miss several minutes of the match while waiting in line and returning the their seats.

It is Walnut Street and nearby blocks where most customers tend to find themselves when shopping In Center City Philadelphia. Why not follow in the footsteps of Seattle sports teams? As one of, if not the best sports cities in the United States, it is difficult see why there is not already a team-sponsored sports shop - nonetheless multiple team endorsed store - in Philadelphia.

For additional pictures of the grand opening of 'The Pro Shop' in downtown Seattle, click here.