One Year With PPL Park, A Place Of Memories

Share All sharing options for: One Year With PPL Park, A Place Of Memories

Exactly one year ago today, on June 27, 2010, Philadelphia Union CEO and Operating Partner Nick Sakiewicz stood in front of a contingent of fans and press, holding a large light switch. It was mid-afternoon, and the thermometer read above 90°F. After making some prepared remarks, Sakiewicz flipped the switch, both signaling the machines behind him to launch confetti into the air, and marking a momentous occasion for the city of Chester and soccer in the Delaware Valley.

Behind Sakiewicz rested an incredible concrete structure, in all its newly-constructed glory. Perhaps it's ironic that Sakiewicz was holding a switch; after all, he had not too long before sold the facility's naming rights to local power provider PPL in an eleven-year, $20 million deal. With that ceremonial flip of a switch, supporters started streaming in to find their seats, and see what there was to see (and, naturally, purchase) in anticipation of a 5:00 PM nationally televised kickoff. The stadium, listed with a seating capacity of some 18,500, but with the ability to host hundreds of additional attendees through standing-room areas, was finally open, and the atmosphere has been electric ever since -- no pun intended.

In the 365 days since then, a lot has changed about the club that occupies PPL Park. Players have come and go. New corporate sponsors have been brought on. There's sufficient demand for the club's local television rights that its matches are now being split across two networks. And, most importantly, success is being found on the pitch. It's all too fitting, then, that as we hit the one year anniversary of the opening of PPL Park, talks of potential expansions over the coming decade have been made public.

Of course, not everything is perfect. There are still several significant issues that the Union will need resolve if they hope to reasonably expand, and keep visitors satisfied.

We'll categorize PPL Park's first year, and what it has looking forward for it, into three categories: the good, the bad, and the ugly. There is one major question regarding the future of PPL Park -- the potential addition of Villanova football as a permanent tenant -- in which there are both supporters and dissenters, and we will not hesitate to give you our opinion on the matter.

For starters, the fans. And not just the Sons of Ben, whose unwavering commitment has been beyond words. Support for this new team has been incredible, and all of those who have been to a Union game are to be commended. PPL Park has had a very exciting aura over its short history (as did Lincoln Financial Field for the two regular season Union matches it hosted), and the seats being filled has everything to do with that. And the seats being filled also has everything to do with these expansion plans.

But it's vital that we not get ahead of ourselves in a lust to see PPL Park transformed into a multi-level behemoth seating roughly 30,000. Yes, the current plans consist of multiple phases. And yes, the first phase "only" grows PPL Park's listed capacity to somewhere around 20,000. But that's not a minor jump. We have to remember that, right now, for any given match, after the 12,000 full season ticket holders take their seats, the 500 partial season ticket holders who have this particular match on their schedule take their seats, and the league, the players' guests, the team and its sponsors take their seats, there are only about 1,000 tickets left for individual sale.

When the Union complete phase one of these plans (tentatively scheduled for 2014), they will have an additional 2,000 seats, and it's probably fair to assume that the majority -- if not all -- of these will go into the individual sale pool. All of a sudden, you've tripled your supply, and you have to be very careful not to outstrip your demand. Now, of course, it only only took the Union six home matches this year to reach the four sellout mark that they attained last year at PPL Park, but until you're selling out every single match at PPL Park, there's little point in expanding. However, assuming the club continues to be competitive, there's no reason to assume that by 2014 the fan base won't be more than ready to take on the newly-available tickets. We'll worry about the larger expansion plans sometime later in the decade, but suffice to say, the Union have to be very careful not to overexpand and end up with a beautiful stadium with a lot of vacant seats (see: Red Bull Arena).

Another key win for PPL Park is that now, with the facility gaining a reputation as a quality place to hold a sporting event, there's increasing demand from outside organizations to use the stadium as a host. Just look at the Rugby Sevens tournament, which took over PPL Park for a weekend that the Union were on the road, and attracted thousands of spectators. The games were nationally televised on NBC, Versus and Universal Sports both Saturday and Sunday, and the event was considered such a success that it was announced before the festivities on Sunday had even ended that the event would be returning again next year. On October 22, the venue will host the Fall Brawl for a Cure, a doubleheader of men's collegiate lacrosse games whose proceeds will benefit the American Cancer Society. The only real downside to some of these once-a-year events is that their markings on the pitch often last for a little while until new unpainted grass grows in, but, again, for one-off events, that's not the worst thing in the world.

Right now, PPL Park has an overflowing concourse that limits mobility and leads to incredibly long lines. It also means that when the second half of the match starts, it seems like the stands are half-empty. And that's because they are. If you don't time your trip to the concession stands and facilities just right, you're likely either going to have to leave your seat a few minutes before the first half ends (yes, and be one of those people that you see on TV walking out of the stands while the action's taking place right in front of them), or risk not making it back in time for the start of the second half. And let's be honest: when you've already paid for tickets and made the trek down to Chester, the last thing you want to do is miss some of the 90 minutes of action you're going through all of this effort to see in person.

If the Union want to expand PPL Park, they must first expand the concourse. Yes, there's only so much you can do when a majority of your attendees are trying to make use of the concourse in the same 15 minutes that halftime lasts, but if it's bad enough when you have 18,500 fans, imagine what will happen when you have 20,000 in the building, or even 30,000. Of course, with the latter, you would expect that the second level would have its own concourse, but issues would remain nonetheless. There was a heck of a lot to enjoy about the Spectrum, and a lot to emulate from it, but if there was one major "feature" for the Union to avoid (aside from the fact that it didn't smell too good after 40 years of operation), it's that its concourse was incredibly narrow and barely acceptable for crowds regularly exceeding 18,000.

The area surrounding PPL Park, too, still isn't that great. No, no one expected the massive waterfront revitalization project that featured public funding for PPL Park as its cornerstone to be "done" in just a year. To think so would be shortsighted. But, outside of the completion of PPL Park, next to nothing has been done to build up the area. Unfortunately, with credit still a bit hard to come by, and the economy still struggling to recover, this doesn't come as too much of a surprise. It sort of makes one question whether the Union would have been better off trying to buy land closer to the sports complex that houses Citizens Bank Park, Lincoln Financial Field and the Wells Fargo Center, and has in the past housed John F. Kennedy Stadium, the Spectrum and Veteran's Stadium. Of course, the answer to that is obvious: it's a lot more appealing to the state government if you're attempting to get funding for a waterfront redevelopment project that just happens to include a soccer stadium in an impoverished county than it is to try and convince them or the cash-strapped city of Philadelphia to fund a soccer stadium right next to $1 billion worth of other newly-constructed facilities largely paid for with public dollars.

Those waterfront projects are essentially on hold at the moment, but hopefully over the coming years -- as the Union begin to expand PPL Park -- the waterfront and its surrounding area will grow and flourish as PPL Park's seating capacity does.

Transportation to and from the stadium, and parking, are still major issues. Fortunately, gone is the need for satellite parking lots with Union-run shuttles going to and from the stadium, but getting in and out of the area is still a mess. A lot of the issues stem from the fact that I-95 on- and off-ramps that go directly to the stadium are still under construction, but that doesn't make the bottlenecks any less annoying. To think that it takes many people upwards of 90 minutes to get out of their parking lot and onto the highway is ridiculous. Again, like with the stadium's narrow concourse, the Union can't feasibly expand the stadium to 20,000 or 30,000 seats if 18,500 are already having serious problems. Fortunately, the first off-ramp is scheduled to be completed sometime later this summer. That alone should help significantly.

And now, the big question: should the Union allow Villanova to move their football program into PPL Park as a primary tenant if they jump to the Big East? Well, this is a soccer blog. We'd like to think that we're being objective in this determination -- looking at both the positives and the negatives -- but there is no avoiding that, in our opinion, the quality of the pitch, the Union fan experience, and soccer in general ought to take priority over Villanova football. After all, this was a facility that was built for the Union, and built for soccer. It is, to borrow a phrase from the vernacular of Major League Soccer's press offices, a "soccer specific stadium." Would it be nice for the Union, who for all intents and purposes control the stadium, to receive a part of all the additional revenue that Villanova football would bring in? Yes. 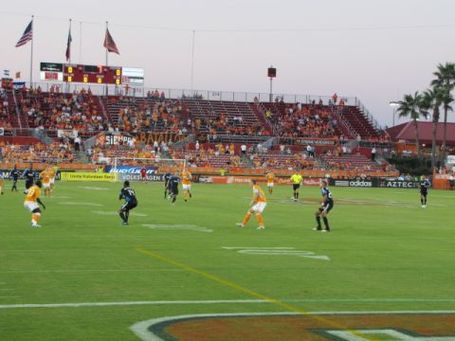 But if that also means that the pitch is chewed up by football cleats, and looks like this (image courtesy of stadiumjourney.com)? No thanks. Villanova's bid to join the Big East -- which would require that it seek a larger venue like PPL Park -- is currently on hold. They haven't been approved, nor have they been denied, though their exact current status is sort of up in the air. We should have a better idea on what and where the future of Villanova football is as NCAA football season approaches.

Ultimately, though, the first year of PPL Park's operation can't be looked at as anything but an unbridled success. The Union have used the facility as a catalyst to grow their fan base, and in return, the fans have latched onto the club, and the venue, with incredible support. To quote Nick Sakiewicz, when the then-nameless MLS Philly organization was planning the construction of PPL Park, their goal was to build "a place of memories." So far, so good.