Share All sharing options for: Carlos Ruiz According To Heat Graphs: Part 1

In this first part of Carlos Ruiz According To Heat Graphs, the Brotherly Game introduces every heat graph from games that MLS has on MLSsoccer.com. The heat graphs are part of MLS' new Chalkboards on its Matchcenter section of MLSsoccer.com.

Each heat graph's coloring shows the locations where a player is for lengths of time during a game. Yellow is the shortest amount of time that shows up, while red is the longest. 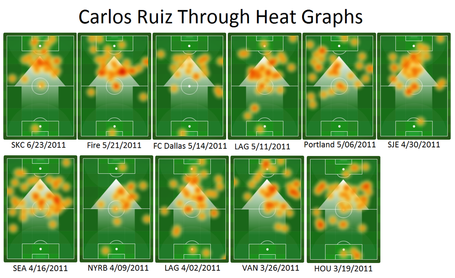 For a larger size of the picture above, please click here.

The most noticeable graph has to be the Vancouver Whitecaps game from March. Ruiz scored the game winner in the second half, after Whitecaps designated player Eric Hassli received his second yellow card and Vancouver was down to 10 men. That goal was a true poacher's goal, with Ruiz only a couple of feet away from the net when Sebastien Le Toux crossed the ball to him.

In part two we'll break down some of the patterns based on team stats and Ruiz's positioning. This first part is to introduce the series and to give readers the ability to begin to draw their own thoughts from all of the graphs being in one place.