Major League Soccer Players Union released its annual report of players' base salary and guaranteed compensation earlier this month.  Yesterday Brotherly Game's Managing Editor, Scott Kessler, published a breakdown of Philadelphia's roster from this report.  As supporters who have paid close attention through the inaugural season and into the early fixtures of the 2011 campaign, the salary discrepancies among the players may not appear entirely justified. Despite this early exposure to the price of players, few are privy to the the details, length and terms of players contracts in the league.

Many readers and supporters commented on the earlier article by Kessler; some disagree with the high cost certain players and others appear the costs are justified.  However, despite the lack of a designated player with a high cost, Philadelphia ranks sixth in median salary in Major League Soccer.  The teams ahead of the Union include Real Salt Lake, Sporting Kansas City, New York Red Bulls, Seattle Sounders and Los Angeles Galaxy.   The use of an average salary provided significantly different results due to teams with numerous star players and hefty contracts.

Upon further inspection of salaries and compensation across the entire league, the Union fall among the lower tier of teams providing lucrative salaries to any one of its players.  Four of the leagues teams including Philadelphia have no players earning more than $260k (Philadelphia, Kansas City, Portland and Chivas).

Provided below is a chart of Philadelphia's roster and respective base salary and guaranteed compensation: 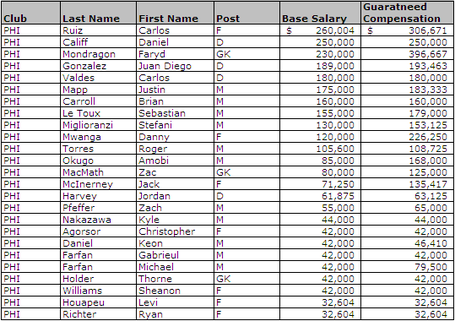 The Designated Player has been important part of the development of MLS as the league begins to attract more and more top talent from abroad.  Only four clubs pay any designated players more than $1 million (in annual base salary). As seven players in the league are compensated in the range of seven figures, both New York and Los Angeles, two of the larger markets in the United States, already have more than one player earning this amount.  New York has two (Henry and Marquez) while Los Angeles leads with three (Beckham, Donovan and Angel). Chicago and Toronto each have one player earning more than one million in 2011.

The starting eleven for the Union (as of the club's most recent match at Porland) includes Faryd Mondragon, Sheanon Williams, Gabriel Farfan (Kyle Nakazawa 64'), Carlos Valdes, Michael Farfan, Sebastien Le Toux, Justin Mapp (Roger Torres 78'), Amobi Okugo (Jack McInerney 78'), Brian Carroll, Danny Mwanga, Carlos Ruiz.  Not including the substitutions, the lineup was valued at $1,491,004; substitutes added an additional $220,850 from the roster.  Despite the result from the away match, the lineup featured four players earning less than $45,000.

The transparency provided by the Players Union is beneficial for the growth of the league and the game in the United States.  The continued disclosure of this information will lead to better justified costs of players.  It is the hope that the long term result will be the inclusion of terms and details of player contracts.