Share All sharing options for: PPL Park Attendance Off To Impressive Start

As Philadelphia prepares for its sixth home match this weekend, the club can continue to anticipate setting records and steadily increasing its overall attendance throughout the remainder of its regular season. The average home attendance for 2011 has already surpassed that of the previous season with 18,044 supporters - less than five-hundred tickets short of a sold out crowd (anything over its maximum capacity of 18,500 at PPL Park). In the club’s first five matches, there have been three sellouts – two of which had more than 19,000 supporters in attendance.

The largest crowd during the inaugural season was 18,779 throughout its regular season played in Chester, PA. The club's home debut against D.C. United at Lincoln Financial Field in April 2010 will likely be an unsurpassable mark until the Union expand PPL Park in the future; 34,870 fans were in attendance to see the club introduced at home. In the first five games at PPL Park in 2010, just one was a sellout - the match versus Seattle when the stadium was officially opened for competition.

More than 228,000 fans entered the gates to PPL Park in 2010 in thirteen matches. A full season will host over 300,000 fans during the course of a longer regular season featuring seventeen matches. 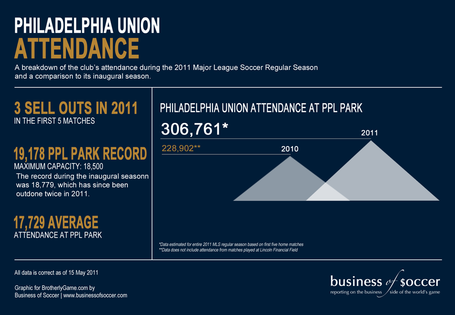 In the club’s last home match versus the Los Angeles Galaxy, PPL Park set a new record for attendance with 19,178. The high attendance was despite the absence of Los Angeles's midfielder, David Beckham; he remained in Los Angeles to rest in preparation of upcoming matches. On the contrary, the Union have also seen their lowest recorded attendance this season with 15,149 supporters at their match against the Seattle Sounders.

It will be interesting to see which way the support and attendance numbers turn as the two highest attended matches - New York and Los Angeles - have already been played at home. Important remaining matches include CONCACAF Champions League finalist, Real Salt Lake, expansion side, Portland Timbers, and last season's 2010 MLS Cup Champions, Colorado Rapids.  Last year against these clubs the Union recorded 16,128 against Real Salt Lake and 17,749 against Colorado. Additionally, Portland should produce numbers rivaling the turnout against Vancouver, which opened the season at home - selling more than 18,500 tickets.

The Philadelphia Union fan base is consistently growing as its the public support. As with the other major sports teams in the city, both the logo and apparel are becoming more noticeable in public, particularly at non-soccer related events. If the average attendance for this 2011 regular season stays as is or continues to increase as the team's performance on the field improves, it could be a few as two more seasons before a sold out crowd becomes the average and only a few more years before the front office begin to consider and develop plans for the renovation and expansion of PPL Park.