Who Should the Union Start Against DC United?

Share All sharing options for: Who Should the Union Start Against DC United?

Tomorrow night, the Philadelphia Union will begin their participation in the 2011 edition of the US Open Cup. The Union will have to win three games to earn a spot in the tournament proper, which they would enter at the Round of 16 along with 7 other MLS clubs.

The Union's first game will be at the Maryland Soccerplex against DC United. Given that it is a midweek game and several players are missing due to injury or international duty, Peter Nowak may have to make some changes to his starting lineups from the first three league games.

Amobi Okugo and Zac MacMath, who may have been likely to play in this type of game, are unavailable as they continue their participation in the CONCACAF U-20 Championship. Justin Mapp has been sidelined for two weeks with a hamstring injury and it seems more likely that Nowak would save him for this Saturday's game against the New York Red Bulls.

In addition, six Union players have logged the full 270 minutes of play during the team's first three games. Danny Califf, Carlos Valdes, Faryd Mondragon, Sebastien Le Toux, Stefani Miglioranzi, and Brian Carroll have not missed a minute this season and Nowak may wish to give a few of these players a rest.

Who do you think Nowak should name in his starting XI tomorrow night? Leave your predictions in the comments section, and check out my best guess after the jump. 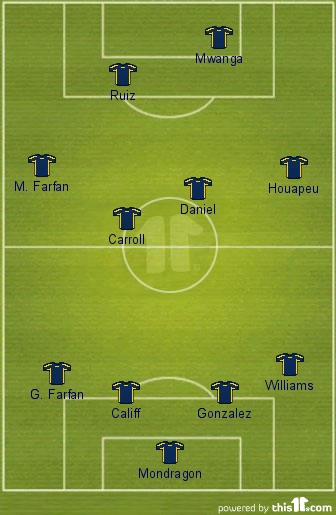 Jordan Harvey, Carlos Valdes, Stefani Miglioranzi, and Seba Le Toux are the regulars that get rested here. Califf and Mondragon continue to anchor the defense while Juan Diego Gonzalez makes his first start of the season. It would be interesting to see how the Farfan twins play together, while Daniel's creativity and Houapeu's speed add new dimensions to the Union attack.