Lack of Creativity in Union Attack Necessitates Change of Formation

Share All sharing options for: Lack of Creativity in Union Attack Necessitates Change of Formation

For the entire 2010 MLS season, Philadelphia Union coach Peter Nowak used a formation that is widely referred to as a 4-2-2-2. The normal back four was utilized along with two forwards; in the midfield, two players would sit back and focus more on breaking up the opponent's possession while the other two midfielders would support the two forwards.

This year, Nowak has moved back and forth between the formation he used last year and a variation of the 4-3-3. In the Houston game, Nowak started Kyle Nakazawa in place of striker Danny Mwanga. The result was Le Toux and winger Justin Mapp playing on the outside in a three-pronged attack with Carlos Ruiz. Nakazawa stayed back with the two players that last year would have been the holding midfilders: Brian Carroll and Stefani Miglioranzi.

In the Vancouver and Los Angeles matchups, Mapp was unavailable, so Mwanga regained his starting place. Le Toux moved to the left while Mwanga took up the right wing position.

The result of this formation has been a dearth of creativity and a lack of shape. In fact, Nowak has made substitutions in all three games that changed the formation back to something that resembles the 4-2-2-2 of last year, such as bringing on Keon Daniel for Mwanga in last night's game against the Galaxy. After the break, I'll propose a new formation that would instill a new energy and a creative spark into the Union team.

The 4-2-2-2 has worked in the past for both the Union and other MLS teams. The Colorado Rapids won a championship last year using the formation, with Jeff Larentowicz and Pablo Mastroeni sitting back while any two of Jamie Smith, Brian Mullan, Wells Thompson, or Mac Kandji took up the two attacking positions. The Union's variation worked as well last year, but changes in personnel have rendered it unusable. Alejandro Moreno's ability to drop back into the midfield to link play was crucial, and Carlos Ruiz is simply a different kind of player whose skill set does not translate well to the 4-2-2-2.

Also, Carroll and Migiloranzi are too similar; only one of them is really needed on the field, and Brian Carroll has proven over years of MLS experience that he can do the job by himself. Kyle Nakazawa has played poorly as well despite being given the start in all three of the Union's games this season, and he needs to be dropped to the bench.

What Nowak must do is move to a formation that facilitates more possession and more creativity. The installation of Roger Torres into the starting lineup is absolutely necessary, and he would play in front of Carroll in what could be referred to as a 4-1-3-2. Carroll would protect the back line and get the ball to Torres, who would form a three-man attacking midfield with Mapp and Le Toux. Mwanga and Ruiz would of course take up the forward positions, but now they would actually be given proper service of the ball.

This may bring up an issue of defending on the wings. To that end, Nowak must stress to both Jordan Harvey and Sheanon Williams that they must choose more wisely when to press into the attack. In fact, Harvey should be told to stay back most of the time to allow Williams to foray forward as he is more apt at crossing and attacking than Harvey.

One other issue could be Torres' fitness. He was unable to go the 90 minutes in any of his starts last year, and Nowak has used him only as a substitute so far this year. Nakazawa could be an option late in games to spell Torres, but Michael Farfan is another interesting option that has yet to be given a chance.

Migloranzi would of course back up Carroll, while Gabriel Farfan would be Justin Mapp's understudy. Nowak has stressed that he likes to have two players at each position in his roster, essentially a first XI and a second XI. While it would be difficult to figure that out for the defense, the Union certainly can form an organized depth chart for the midfielders and forwards. Levi Houapeu would be Le Toux's back-up, and Jack McInerney and Chris Agorsor would be the counterparts of Ruiz and Mwanga. 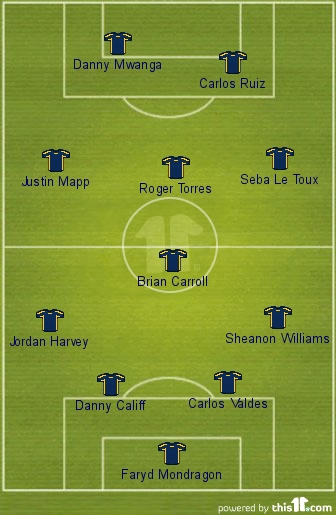 What do you think of this formation? Think it would create the attacking spark that the Union needs? Would it leave too many holes on defense, or is the experienced Carroll up to the task? Leave your thoughts in the comments section.