BIMBO Billboard Photo Shoppe Zoo With Roy Would Be Proud Of

Share All sharing options for: BIMBO Billboard Photo Shoppe Zoo With Roy Would Be Proud Of

The BIMBO Bear is tired of people not pronouncing his company's name correctly, shown here in a doctored photo of one of the BIMBO billboards on I-95 and various locations in Philadelphia.

While the Union have gained enough internet media popularity to have spawned two fake Twitter accounts, the team has yet to find itself with anyone who covers the team quite like The Fightins or I Want To Go To The Zoo With Roy (the reference made in the headline is to a meme that Zoo With Roy coined) do with the Philadelphia Phillies. One of the main components of both sites' successes is the use of Photoshopped images or screen cap .gif images, aided by humorous takes on the Phillies and baseball.

Beyond @FakePeterNowak, this photo may be the most clever Union related piece of humor that doesn't involve the people of Section 133 (go onto the Sons of Ben's Facebook page to see why, some slightly NSFW).

Photo of a normal billboard after the jump. 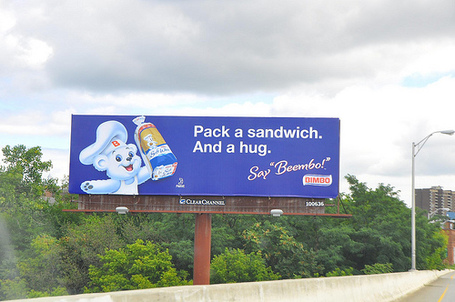 Looking back only a couple of months, such a picture would have had not only a different sentence, but also a completely different slant.

There was plenty of uproar back in December and January about the Union's decision to accept BIMBO's 4 year, $12 million offer to become the second year club's first ever jersey sponsor. Since the end of January there has been little-to-no complaining about the choice, at least in comparison to the initial negative criticisms. With $3 million-a-year to potentially spend on designated players in the future, or to improve off-the-field parts of the franchise, the fanbase has changed its tune about the business decision.

Perhaps it's also because this team has punched three teams in the face already this season with BIMBO on their chests.