Social Media and the Philadelphia Union

Share All sharing options for: Social Media and the Philadelphia Union

For the 15,149 fans who attended the last match at PPL Park, many may have noticed something unusual.  It was not that the stands were half empty or that this was the first home match the team experienced less than ideal conditions. For the first time in two seasons, fans were able to quickly and easily access the internet and data through mobile phones and connected devices.

Despite the supposed number of fans in attendance mentioned above, in all likelihood there were much less actually in the seats.  From a personal experience, as well as those around section 137, many of us were able to access applications such as Foursquare, Facebook, Twitter and more.  More importantly, the Mangia application, which allows fans to order food and have it delivered to their seats, worked flawlessly.

While few fans may have had the opportunity to notice that service was working as many kept devices out of the rain and in their pockets, this should serve as notice of the importance of access to internet and cellular connections. With the internet comes social media, an area that the Philadelphia are excelling in despite their limited existence as last year's expansion team, particularly when comparing themselves to teams with over sixteen years in the league.

The Union fall in third in MLS with nearly 63,000 fans on Facebook and tenth on Twitter with over 12,000 followers.  The graphic below depicts the teams around and above the club with regards to these two social media platforms. With clubs like Seattle and Los Angeles' overwhelming fan response, the Union still have a long way to go. 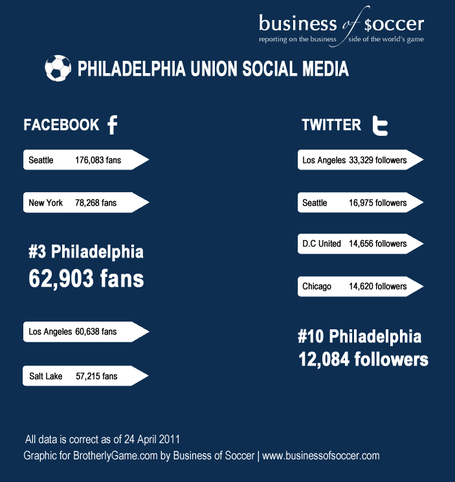 In a recent interview with Chicago Fire's Jeff Crandall, he discussed the success of the Philadelphia Union in social media with respect to the rest of Major League Soccer:

tBG: How do you feel the Union handle social media compared to other MLS clubs?

Crandall: I think they do a very good job, though I’d say just like numbers in the stands, numbers on social media are really helped sometime by the newness of some of these clubs. They’re able to take great advantage of the novelty of the team and incorporate from the ground level as part of their launch. I think a lot of the longer-running MLS teams were maybe slow to react to the power of social networking and are just now catching up.

I’d also say that two other factors which are out of control of somebody like myself play a factor in the rise of social media numbers: 1) Having high-profile players on your roster (e.g. New York’s numbers skyrocketed last year after signing Henry and Marquez) and 2) success on the field (Salt Lake is one of the smallest markets in MLS but has the fifth highest following league-wide on Facebook).

Additionally, while interviewing Sporting Kansas City's Vice President of Development, David Ficklin, he discussed the importance of having a truly wireless and internet connected facility:

tBG: One of the biggest complaints at a lot of stadiums, not only in Major League Soccer, is the cellular and data connections.  How does Sporting Kansas City plan on preventing issues at LIVESTRONG Sporting Park?

Ficklin: The owners are technology guys.  The entire stadium will be wireless.  Millions of dollars were spent on cell phone coverage and live streaming video is going to be available in the stadium.  We said from the beginning that we wanted fans to be able to use their handheld devices in the stadium.  We worked with Cisco to make this possible.

The lack of internet and wireless accessibility is a huge downfall at any facility.  While it is not uncommon to visit a venue in any of the major sports leagues and experience cellular and internet connectivity issues, it is equally a huge opportunity for teams. It is often easy to blame AT&T or Verizon for such issues but it is even more frustrating when a team is to expect nearly twenty-thousand people at a venue and be unprepared for the volume of mobile devices in use.  Nothing is ever perfect on the first attempt and with time, many of the growing pains that PPL Park has experienced will dissipate as the club moves forward and improves the overall fan experience.