Share All sharing options for: Under A Microscope: Danny Califf's Goal Saving Block

When the Sons of Ben decide to chant a player's name during a Philadelphia Union game, there are only two main reasons for it happening: (1) A substitute comes onto the field (i.e. Ooooooh Danny Mwanga) or (2) a spectacular play was had by an Union player.

Carlos Ruiz, the Union's Guatemalan international striker, had the Sons of Ben chanting his name after his freekick goal in the 32nd minute, to put the Union up 1-0 over the Seattle Sounders. Danny Califf had his own moment to shine later on in the game, one of equal importance to that of Ruiz's goal to the game's outcome.

After a save by goalkeeper Faryd Mondragon, after a shot by the Sounders' forward Fredy Montero, spilled into the middle of the 18, Califf made the save of the year (so far) for the Union. Facing down an Alvaro Fernandez  shot straight on goal, Califf managed to drive shot clear off the line. The ball hit Califf high and fast, leaving little time to see exactly where the ball struck him.

The Sounders in the area quickly raised their hands, hoping to have the referee call a handball on Califf. Instead, referee Terry Vaughn quickly, and strongly, signaled off their requests. Califf's block stood and the Union almost made off with a counter attack.

What do you think the ball struck? Chin? Face? Shoulder? Arm? A picture of the exact moment after the jump. 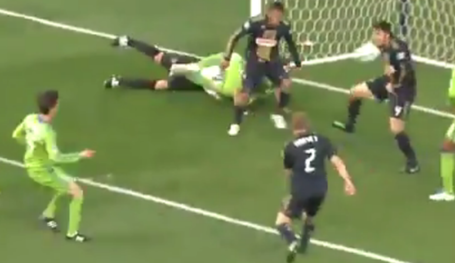 Apologies for the grainy picture, it's the best quality available.

After watching the play repeatedly and viewing this picture, it's pretty clear to me that the ball strikers Califf in the face. His reaction afterwards indicates that theory, as his head snaps back from what would be a case of whiplash. For once this season a referee got an important call inside the box correct. Kudos to Vaughn.

Here's the video of the play (skip to 4:09 for the replays that are closer to the action that the live tape):

After seeing the "evidence," what do you think happened?