We really weren't kidding when we said earlier tonight that the Union had shaken up their local broadcast presence.

Here's the quick breakdown: all 34 regular-season games are scheduled to be televised locally. In addition to three matches on ESPN2 and four on Fox Soccer Channel, seven will air on 6abc, and nineteen will air on either Comcast SportsNet or the Comcast Network (formerly CN8). No matches on 6abc's Live Well HD Network subchannel this year. More in-depth analysis, including a full list, and a potential reason for why those numbers add up to 33, after the jump.

And there you have it. 6abc takes some Saturday afternoon/evening matches that it can fit into its schedule, and the rest belongs to CSN. By "CSN/TCN", it is most certainly not meant that matches will air on both Comcast SportsNet and The Comcast Network, but instead probably that a decision will be made on a match-by-match basis depending on a variety of factors (mostly, does CSN have some other live programming -- notably, a Phillies game -- that might cause a conflict) as to whether the match will air on CSN or TCN. It's important to note that the decision apparently has already been made for the Saturday night match at Vancouver (scheduled for a 10PM Eastern start), and that match will air on CSN. It's also probably fair to assume that all 6abc, Comcast SportsNet and The Comcast Network matches will air in HD.

In addition to their picking up of a large batch of telecasts, Comcast SportsNet will air a half-hour Union-related show on CSN every week called 'State of the Union' (original, right?), likely in the style of the 'Orange Line', CSN's weekly Flyers magazine show. It's probably fair to assume that 'State of the Union', like 'Orange Line', will mostly be used as filler for afternoons or nights when the network doesn't have anything to cover, but still, that alone is so much better than the Union's current status on the network, which is next to nonexistent.

This is a fascinating turn of events from the Union's local broadcasting presence last season. 6abc proper aired six matches last season, and the remainder of non-nationally televised matches were broadcast on its Live Well HD Network subchannel, which is essentially impossible to find unless you're looking for it. Club management was probably as unhappy about that as you and I were -- and the fact that the Union was at least partially, if not fully, on the hook for broadcast production for Live Well matches -- so it's not that surprising that they were interested in finding a secondary broadcast partner. This season, seven matches will air on 6abc, and matches that would have likely aired on Live Well will now find themselves broadcast on the much, much, much, much more prominent Comcast group of networks.

It's honestly impossible to quantify how big of a leap this is for the Union. Outside of Comcast's prominence in local politics, it is the fact that satellite providers cannot offer Comcast SportsNet due to a loophole from the station's PRISM heritage that has caused Comcast to be all-but-ubiquitous in many parts of the city and the surrounding areas. The station is that important. People in this city who follow sports watch Comcast SportsNet, and their covering matches and perhaps discussing the Union a little bit with Bob Rigby and Taylor Twellman could help bring in new fans who either don't know much about the Union or who won't necessarily go out of their way to find a match (like if the telecast is on Live Well HD Network), but if presented in front of them while surfing channels or checking to see what's on CSN, might just stick around for some of the match. And you never know -- that channel surfer might just turn into a fan. From a financial end, Comcast will almost certainly be providing production assistance for their telecasts, lessening the costs on the Union. In fact, one must wonder if 6abc telecasts will also be produced by Comcast, with Comcast graphics, similar to Phillies games on PHL 17.

Three of the last Union away matches last season on Live Well HD Network were called from a studio inside of PPL Park. The only person that appeared to be onsite in San Jose, Colorado and Columbus was someone to stick from either 6abc or the Union to make sure that the right cameras were setup and that their production crews back in Philadelphia had proper access. That was likely a cost cutting measure by the Union, but with 6abc providing production assistance / funds for their telecasts on the main station, and CSN likely helping on their end, it is perhaps fair to say that the Union's three-man broadcast crew will be at every match they call this season (besides, what good is a sideline reporter who can't be on the sideline?).

In all of this good news for the Union, there is one glaring potential issue. Saturday, May 21's home match against Chicago Fire currently has no local telecast listed, just the national Spanish telecast on Galavision, even though clubs are allowed to produce local English telecasts to coincide with national Spanish broadcasts. There is reason for some optimism, though -- there were a few matches that at this point last year were still unclear about whether there would be local coverage (likely because 6abc had yet to decide whether they would air the match on 6abc or Live Well), and in the end they were all televised. So it's certainly possible that the only reason for there not being a local telecast listed is because the Union, 6abc and Comcast SportsNet have not yet decided which one will carry it. If worse comes to worst, the game will be aired nationally on Galavision in Spanish, but that is obviously not what Union fans (well, ones who don't speak Spanish, anyway) will want to be watching.

I will close with a final question: the Union were to make the playoffs this season, and are slotted into one of the series that entails national Spanish broadcasts, which allows for the two clubs involved to produce local regional telecasts, would CSN or 6abc would get priority for coverage of those matches? One can only hope that we get the chance to find out this fall.

(Below is the image version of the Union's 2011 TV schedule.) 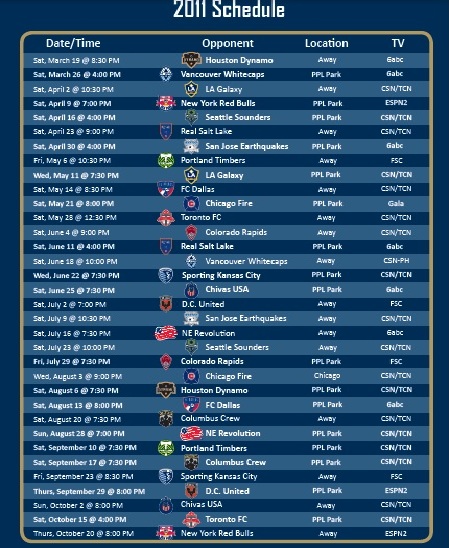