Share All sharing options for: Taylor Twellman Is The Union's New Color Commentator

JP Dellacamera will have a new broadcast partner on 6abc, as the Philadelphia Union have brought on former New England Revolution striker Taylor Twellman to replace ESPN's Kyle Martino.

Per the 2011 Philadelphia Union media guide, the Revolution great will also join new sideline reporter Bob Rigby as part of the Union's revamped television broadcast team. Twellman began his broadcasting career last season with ESPN, along with joining Comcast Sportsnet as one of its World Cup analysts. He also covered the first round of the 2011 MLS SuperDraft for ESPN.

During the team's inaugural season, the TV broadcasts mainly featured FSC bound Dellacamera as the play-by-play man, with Martino as the color commentator and a 6abc reporter as the sideline, pregame and postgame commentator.

Twellman spent 2002-2010 with the Revolution, scoring 101 goals in 174 regular season MLS games. He also scored 6 goals in 29 games for the US National Team. After starring for the University of Maryland during his two years in college (1998 and 1999), Twellman signed with Bundesliga side 1860 Munich II, before being drafted in the 2002 MLS SuperDraft, second overall, by the Revolution.

Rigby spent time in the NASL during his 12-year soccer career and is a Philadelphia soccer legend. Setting NASL records during his long career, Rigby was considered by experts and peers alike to be one of the best US goalkeepers of his generation. Of recent, the former national team goalkeeper has taken on roles as a high school soccer coach and a coach at a soccer academy. 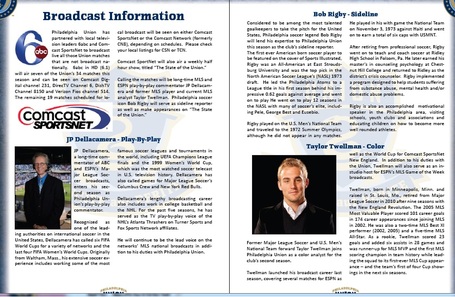