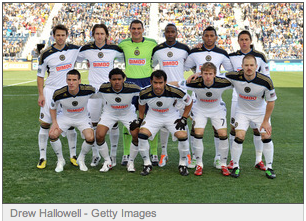 It has been known for some time that the Philadelphia Union would be launching a third kit.  Hints and mixed messages had been spread across the web for several months in soccer forums and on social media sites (i.e. Twitter).  Union fans began to speculate what the third kit could look like and mockups ranged from a light blue, Sons of Ben supporters style kit to an all white kit; almost anything to replace the club's away, khaki or gold colored uniforms that did not catch on with every fan.

In October 2010, Philly.com sat down with former Philadelphia Union President, Tom Veit, to reflect on the inaugural season as well as discuss the club's plans for the future.  It was this interview and feature on philadelphiaunion.com that had sparked the kit mock-ups and conversation:

Philly.com: Lastly, I know some of the teams in the league are going to change their uniforms in the next season.  Do you expect any changes for the Union?

Veit: No, we're on a two-year jersey cycle, but there could possibly be a third strip coming out.

On Saturday, the Philadelphia Union starters came out of the tunnel beneath the Sons of Ben and to the surprise of the sold out crowd, wearing the new third kit - white socks, shorts and jersey.  It was instead Vancouver who were wearing navy at PPL Park.  Everyone quickly reacted, with positive comments, about the club's new strip; the white was a welcome change among the home supporters.

Announcements were made not too longer officially introducing the white kit in an uncharacteristic style.  Images on the stadium's screen directed to fans to the various sections selling the new top.  Following the full-time whistle, it did not appear many of the white jerseys were still available for sale, indicating a positive reactions and quick sales from fans throughout the match.

The kit was the same as that originally leaked by Scott Kessler here on Brotherly Game on February 1st.  Major League Soccer inadvertently released the image on mlsgear.com.  The only difference between the leaked kit and the kits worn by the Union yesterday was logo of the club's official jersey sponsor, Bimbo; everything else was exactly the same. As noted by Kessler and verified by fan reactions on Saturday, the Bimbo sponsor logo fits well on the white kit, much better than both the navy and khaki kits.

However, was this a missed opportunity for the Philadelphia Union?  That depends who you ask.

The club could have done more to build anticipation and demand before its official launch.  Reflecting on the U.S. Men's National Team and Nike campaign, "Red All Over," it was a strategy that involved the fans.  Though it was quite obvious the kit was going to be red and the fans had no formal input on its design (which did not actually change), Nike and US MNT allowed fans to participate in one element for the kit's debut versus Argentina, a new motto that would appear on the sleeve of each jersey.  Additionally, Nike and U.S. Soccer made the red kit available to supporters on Friday, one day before the match versus Argentina.  The marketing and twitter campaign #redallover kept fans informed and appeared to be most effective.

Philadelphia Union saw opportunity in their approach, as well.  Confirming months of speculation among fans, much of the reaction among Sons of Ben supporters was positive.  The third kit provides a completely different look as opposed to the kits introduced in 2010 featuring a stripe down the center of the top.  The all white kit is a clean slate for the club that is now on a two-game winning streak with 6 points atop of the Eastern Conference.

During a conversation with Philadelphia Union Executive Vice President and Chief Revenue Officer, Dave Rowan, fans can expect much more from the new kit.  It is a kit that allows for much more creativity.  Dave was able to comment that additional plans would include partnering with the Sons of Ben and supporters in the future. However, we will have to wait to see what those plans entail.