I recently purchased an iPad2 and one of the apps I was excited to get my hands on was the MLS app. The features I had read about, especially the matchday live streaming, were things I had been looking forward to using during the season to keep me up to date on the day to day of the league. Over the past week, I've been using the app to get me ready for the upcoming season.

The layout overall on the app has a nice flow. I really enjoy the "newspaper" feel to the front page of both the MLS page and the Union page with the latest articles. When selecting a team on the "team page" it plays a chant by the supporters with two exceptions - "Chelsea Dagger" is played for the Dynamo and "DOOP" is played for the Union. (It also reconfirms the Union have the coolest celebration song.) The matchday page has an easy to navigate layout with easy access to highlights from previous games as well as location/timing details for all games for the full season and the goal of the week tab on the MLS page is convenient though the week one winner's highlight isn't on the page currently.

Unfortunately, with the highlights of the app, there seems to be more disappointment. The biggest issue I had was the streaming didn't work. I was out of town trying to watch the opening match and spent $40 for streaming capabilities that were useless. There wasn't an error message or a game blackout indication. It just didn't work. I also have the notification settings on to notify me of any goals, substitutions or penalties and nothing worked. By reading my twitter feed I found out about the goal 10+ minutes after Califf scored. Also, the roster portion of the Union page isn't updated. It's almost a week after the first match and nothing is updated. The "today" portion of the Union page does show that we've won a game and have three points, but the W/T/L icon is still blank in all columns. 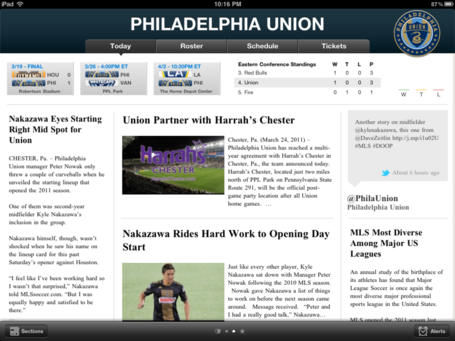 I think a picture would be a better choice on the roster portion of the page instead of the Union logo. The updating of what seems to be the biggest feature, Matchday, is quite behind. The matchup page for tomorrow's match against the Whitecaps is still blank. Days before the game last week there was a 2-3 paragraph write up about the history between the Union and Dynamo and what to look for. Less than 24 hours before the next match and there's nothing up there. 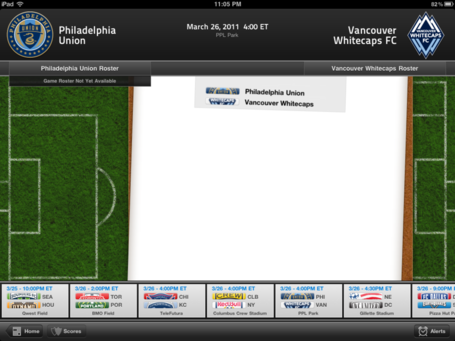 At this point, I'm ready to contact Apple and see if I can get my money back as I won't be able to use the live streaming for almost all of the away games this season due to blackout restrictions. I definitely think there's potential for this to improve but at this point, it isn't rather useful. 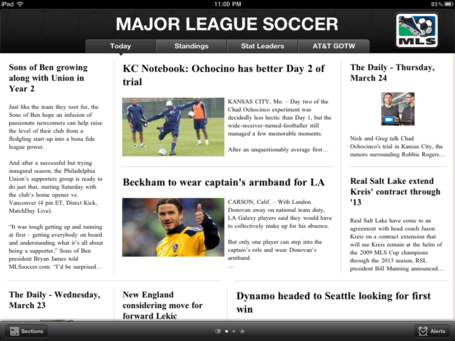