Facilities That Every Soccer City Must Have

Share All sharing options for: Facilities That Every Soccer City Must Have 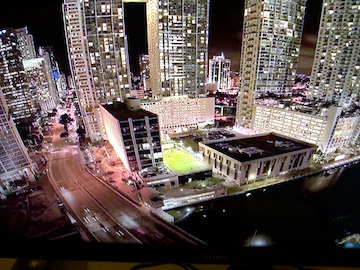 In January, MLS Commissioner, Don Garber, visited the Fort Lauderdale Strikers (formerly Miami F.C.) while exploring potential markets for the league's 20th club.  Miami may have a second chance at success in the first division after the league removed the Miami Fusion in 2001. Despite the significant presence of the other major sports along the Miami skyline, the picture to the right defines how important soccer is to the culture in Miami.

While traveling to Miami during a recent business trip, I had the opportunity to visit several soccer facilities in the city. Friends and locals alike were helpful in locating where the game is played most often at a high-level.  None of the facilities were difficult to find and are spread throughout the downtown area.

For a city without a first division professional team, it is difficult to comprehend how cities and regions with multiple professional teams have not already begun to foster the development and love for the game that facilities like this can provide.  Despite the construction of additional soccer-specific stadiums in the United States, less than half of the current Major League Soccer clubs play within city limits of the city which they represent.

tBG: How and when did the idea for Soccer Rooftop begin?

Coco: The idea originally came from one of the investors. He’s Colombian and in Colombia they have these type of fields on rooftops so he wanted to bring that concept here to Miami.

tBG: Was the intention to improve upon existing facilities in Miami or a new idea for the city?

Coco: More than anything it was to give soccer players a new idea and different type of option when looking to play in South Florida. Especially in Miami you have a lot of fields that are mainly indoor and this gives you something different. Why not take advantage of our location in the heart of Brickell where there’s such a broad range of nationalities and cultures who love soccer.

tBG: Can you comment on the various ways which footballers can play (i.e. pickup, organized leagues, etc.)?

Coco: The majority of our customers play 6v6 or you can even play 5v5. Usually friends get together and schedule a rental on certain weekday for the entire year. For example they are schedule every Monday at 6:30pm. We also do an organized co-ed league on Wednesday’s. We also have kids programs where we do training for kids. Hosting kid’s birthday parties are very popular as well. Corporate and sponsored events take place here also. 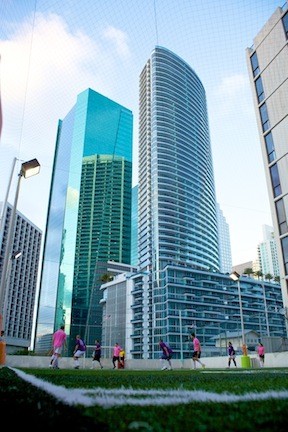 tBG: Soccer Rooftop is centrally located near Brickell Ave., but appears to be hidden among the hotels and bars. How do you advertise in the area to draw attention? Or do you depend on word of mouth and referrals?

Coco: Mostly it’s through word of mouth, but we also advertise in local sports newspapers. We recently worked with a company to promote our fields through a direct mailer concentrating in the Brickell area. We are very fortunate because not only do we get people that can easily walk to our fields, but we get people that travel as far as 45 minutes to play here too.

tBG: What are the future plans for Soccer Rooftop? Additional development or construction?

Coco: We definitely are looking to open more facilities not only in Florida, but throughout the US. We are already in plans to open in Los Angeles and Phoenix.

The facilities, such as Soccer Rooftop, are not only impressive, but are certainly to become the envy of other major cities currently home to first division soccer in the United States.

All photographs courtesy of Soccer Rooftop.