Good news, Comcast subscribers inside the city of Philadelphia! Starting "on or around" April 12, those with the $6.95 per month Sports Entertainment Package will see Fox Soccer Channel HD added to their cable lineup on channel 1512 (and GOL TV HD on channel 1513).

Indeed, perhaps the single biggest complaint that American soccer fans have about Major League Soccer's national TV presence is that the majority do not receive Fox Soccer Channel in HD, and therefore can't watch all of their team's matches in HD. While a match is perhaps best seen in person at a stadium, the difference between watching a professional soccer match in high definition and standard definition is rather incredible, and so it's no surprise that MLS has mandated since the beginning of last season that every single League match be produced in high definition, whether the match is being broadcast nationally or locally (of course, whether the match is aired in high definition is another question, but it's still a big step in the right direction).

While it's unfortunate that this is not a nationwide rollout, and apparently not even one that will reach those in the suburbs (surely, though, whatever HD additions Philadelphia proper gets will propagate throughout the suburbs and surrounding area soon enough), it's a good step forward for Fox Sports executives, who to this point had only managed to get Comcast to supply subscribers in Albuquerque, New Mexico with a high definition feed. Hopefully it's also a sign of things to come for the channel that has already revamped its MLS broadcast teams, adding current Union play-by-play man J.P. Dellacamera and former Union color analyst Kyle Martino for Friday night telecasts and reportedly bringing back Allen Hopkins for Saturday night telecasts, in an effort to boost the quality of their original productions, likely motivated in part by the possible competition of Comcast's Versus for future rights to the League's secondary national broadcast package, which will be up for grabs once again following this season.

Read the full announcement from Comcast after the jump (picture included), and more analysis, to see what other channels are being added...

One must wonder if Comcast finally bringing FSC HD to Philadelphia had anything to do with their agreement with the Union to air twenty matches this season on Comcast SportsNet and The Comcast Network. Probably not, since this is a pretty big change to their channel lineup and has likely been in the works for months now, but perhaps a minor area of the Union's discussions with Comcast was to receive their assurances that local fans would, indeed, be able to watch every match in high definition, whether on a Comcast-owned channel or not.

The Union will be featured on Fox Soccer Channel four times this season, starting with their match against Portland at PGE Park on Friday, May 6. That should leave plenty of time for distribution of the channel to reach all Comcast subscribers within the city, and hopefully for subscribers throughout the rest of the Delaware Valley, too. 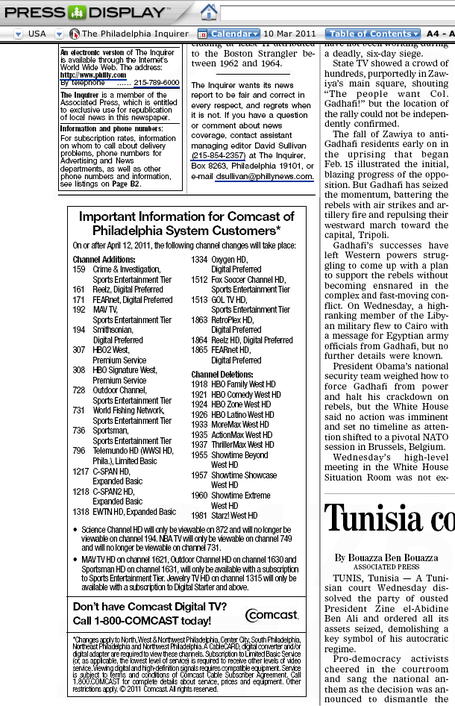 I know, aren't you excited to get the Crime & Investigation Network, too?