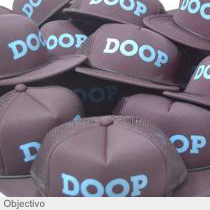 The latest Philadelphia Union fan contest and the inclusion of a DOOP scarf in season ticket holder packages has prompted several questions about who owns the rights to the word 'DOOP'. While the contest awards a fan submitting the best DOOP-related design for a t-shirt to be sold by the Philadelphia Union, it is the season ticket holder scarf that is more interesting as the Sons of Ben will similarly be providing its paid members with scarves.

The questions of what if DOOP was trademarked and how it would affect Sons of Ben and the supporters immediately arose. Often when the interests of the business and its supporters cross, it creates a less than desired result. Connecting the community to the team, whether it be DOOP or something else, can be as important as the atmosphere inside the stadium and, at times, the performance of the team. The trademarking of DOOP has the potential to remove a significant element of the fan experience.

These questions inspired a search of the United States Patent and Trademark Office website, which resulted in three trademarks for DOOP. Though one trademark filed in 1969 for a bridgetype card game has expired, another was filed in 2009 relating to hair products. It is the third trademark filed February 7, 2011 that is the most intriguing. The trademark documentation online has not yet been updated as approved and registered. However, according to the Philadelphia Union, the trademark has been officially granted to Keystone Sports and Entertainment for use on several products.

The trademark covers decorative magnets, bumper stickers, decals, posters, printed paper signs, prints, stickers, plastic key chains, drinking glasses, mugs, plastic water bottles sold empty, cloth pennants, fabric flags, towels, hats, jackets, scarves, short-sleeved and long-sleeved t-shirts, sweatshirts and entertainment in the nature of soccer games. It is clear that the Union have significant interest in the marketing potential of DOOP and the selection of products that will be popular among consumers. The club already features the DOOP anthem following goals and appears to be introducing new merchandise throughout the upcoming season.

Despite much of the structure of Major League Soccer, the league itself has no rights to DOOP, avoiding any issue similar to the 'Who Dat' trademark dispute in 2010 between the National Football League and the New Orleans Saints. Although, the NFL never had any legal power over the use of the phrase, it was successful in bullying many third-party retailers in to ceasing sales of such product. The only licensing requirement exists with any products utilizing Philadelphia Union or MLS logos, in which case it is required that adidas product to be used.  In the case of just DOOP, adidas is not required - despite its association. This is a favorite of t-shirt companies such as Bark Tees and Objectivo.

In an interview with Benjamin Lee of Bark Tees LLC, he expressed that his company was not concerned with the trademarking as there is more to the Union than one word:

"Worse case scenario would be that they trademark it, and then make a decision to tell us to stop making shirts that say 'DOOP' on it."

Ben expressed that Bark Tees has received strong support from the Philadelphia Union and has been given permission to sell merchandise outside PPL Park, including in the parking lots during Sons of Ben tailgates. Bark Tees has even received the support of the club  for the 'Stache Bash', a Sons of Ben 'Help Kick Hunger' fundraiser which currently appears on the front page of philadelphiaunion.com. Bark Tees is a sponsor, alongside Brotherly Game, for the event benefitting the Bernardine Center.

By trademarking DOOP, the rights allow the Philadelphia Union several options including the potential to license retailers and manufacturers of the merchandise. The intention was never to damage existing relationships with third party retailers and following a recent interview with Chief Revenue Officer and Executive Vice President of the Philadelphia Union, Dave Rowan commented:

"Quality control makes sure it's done the right way... You want to protect the trademark.  If you do not protect it, the [consumer] ends up with with knock-off products."

Philadelphia Union Front Office works very closely with the Sons of Ben leadership team to discuss matters related to Union supporters. However, it appears that this was not a matter brought to the attention of the Sons of Ben. Although DOOP was the creation of several discussions between Union Manager Piotr Nowak, Sons of Ben President, Bryan James, and Matchday Coordinator, Corey Furlan, it is not clear who may have had the initial rights to the word.

As it appears that DOOP has qualified and been approved for trademark protection, rights to a trademark can be acquired in one of two ways, either by being the first to use the word in commerce or by being the first to register the mark with the U.S. Patent and Trademark Office. Although Keystone Sports and Entertainment has first filed for trademark, more than one retailer produced DOOP apparel and merchandise before February 7th of this year.

The effort to trademark 'DOOP' is a smart business move by the Philadelphia Union as it appears others may have been able to file to claim it, as well. Protecting the intellectual property of the club is important as the Union enter their second regular season and the team continues to build its fan base and its business. The publicity and support of its fans and the community is even more important for the team to gain the attention of even general sports fans in Philadelphia. How the Union choose to manage its rights to the word has the ability to affect many relationships among not only retailers but the supporters group who petitioned so much for its existence.